Idiopathic pulmonary fibrosis (IPF) is a fatal fibrotic lung disorder with no effective medical treatments available. The generation of myofibroblasts, which are critical for fibrogenesis, requires both a mechanical signal and activated TGF-β; however, it is not clear how fibroblasts sense and transmit the mechanical signal(s) that promote differentiation into myofibroblasts. As transient receptor potential vanilloid 4 (TRPV4) channels are activated in response to changes in plasma membrane stretch/matrix stiffness, we investigated whether TRPV4 contributes to generation of myofibroblasts and/or experimental lung fibrosis. We determined that TRPV4 activity is upregulated in lung fibroblasts derived from patients with IPF. Moreover, TRPV4-deficient mice were protected from fibrosis. Furthermore, genetic ablation or pharmacological inhibition of TRPV4 function abrogated myofibroblast differentiation, which was restored by TRPV4 reintroduction. TRPV4 channel activity was elevated when cells were plated on matrices of increasing stiffness or on fibrotic lung tissue, and matrix stiffness–dependent myofibroblast differentiation was reduced in response to TRVP4 inhibition. TRPV4 activity modulated TGF-β1–dependent actions in a SMAD-independent manner, enhanced actomyosin remodeling, and increased nuclear translocation of the α-SMA transcription coactivator (MRTF-A). Together, these data indicate that TRPV4 activity mediates pulmonary fibrogenesis and suggest that manipulation of TRPV4 channel activity has potential as a therapeutic approach for fibrotic diseases. 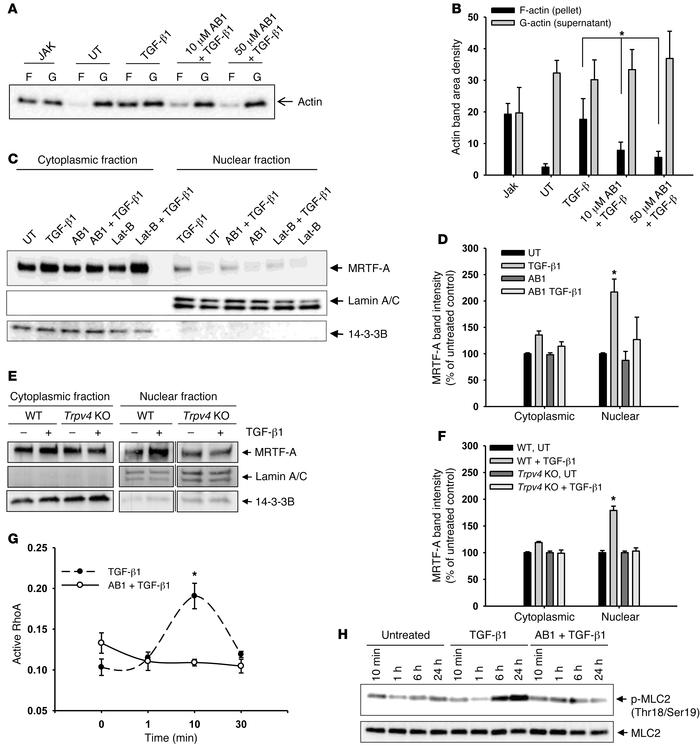 (–) HLFs were incubated with or without TGF-β1 (2 ng/ml, 48 hours) as well as with or without indicated TRPV4 inhibitor (AB1) or with or without inhibitor (latrunculin B [Lat-B], 500 nM) or activator (jasplakinolide [Jak], 100 nM) of actin polymerization, as indicated. = 3. Results are expressed as mean ± SEM. () Immunoblots of cell lysates were separated into F-actin (filamentous) and G-actin (monomeric) fractions, which show abrogation of F-actin formation upon TRPV4 inhibition by AB1. () Quantification of results in . * < 0.05 for TGF-β1–treated cells with or without AB1. () MRTF-A nuclear translocation is abrogated by TRPV4 inhibition. Nuclear and cytoplasmic fractions were separated, and an equal amount of protein per lane was immunoblotted for MRTF-A, a nuclear marker (lamin A/C), and a cytoplasmic marker (14-3-3B). () Quantification of results from . * < 0.05 for TGF-β1–treated cells with vs. without AB1. () As in , immunoblots show MRTF-A nuclear translocation is abrogated in KO mouse lung fibroblasts. () Quantification of results from . Results are expressed as mean ± SEM. * < 0.05 for TGF-β1 WT cells vs. KO cells ( = 3). () G-LISA RhoA activation assay shows inhibition of TGF-β1–induced activation of RhoA by TRPV4 antagonist, AB1. * < 0.05 for TGF-β1–treated cells with or without AB1 at 10 minutes; = 3. Results are expressed as mean ± SEM. () HLFs were pretreated with or without AB1 (20 μM) followed by TGF-β1 (2 ng/ml) for indicated times. Sonicated cell lysates ( = 2) were immunoblotted for total MLC2 or activated MLC2 (p-MLC2).