The genetics and immunobiology of IgA nephropathy

The genetics and immunobiology of IgA nephropathy

IgA nephropathy (IgAN) represents the leading cause of kidney failure among East Asian populations and the most frequent form of primary glomerulonephritis among Europeans. Patients with IgAN develop characteristic IgA1-containing immune complexes that deposit in the glomerular mesangium, producing progressive kidney injury. Recent studies define IgAN as an autoimmune trait of complex architecture with a strong genetic determination. This Review summarizes new insights into the role of the -glycosylation pathway, anti-glycan immune response, mucosal immunity, antigen processing and presentation, and the alternative complement pathway in the pathogenesis of IgAN. 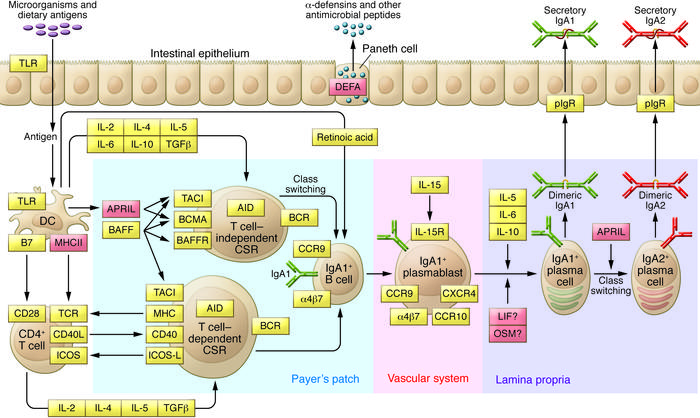 IgA is the most abundant antibody isotype in the body, with the majority of IgA found in mucosal secretions. Mucosal IgA production is induced by T cell–dependent or T cell–independent mechanisms. T cell–independent production of IgA is primarily stimulated by IL-6, IL-10, TGF-β, BAFF, and APRIL produced by intestinal epithelial, dendritic, and stromal cells. In this environment, intestinal B cells undergo class switching from IgM to IgA1. IgA1 to IgA2 class switching can also occur and is promoted by APRIL and the mucosal milieu. IgA-secreting plasma cells migrate to lamina propria, where they release dimeric IgA. The dimers are formed through an interaction of two IgA molecules with a joining chain, which is synthesized by plasma cells. IgA dimers can bind to the polymeric Ig receptor (pIgR) on the basolateral surface of the mucosal epithelium and undergo transcytosis to the apical surface, where they dissociate from pIgR and are secreted into the lumen, carrying the secretory component of the receptor. The secretory component protects IgA molecules from proteolytic enzymes in the gut lumen. The bacteriostatic effects of secretory IgA are accompanied by antimicrobial peptides, such as defensins, secreted into the gut lumen by Paneth cells. The key molecules involved in the intestinal network of IgA production are indicated in orange; molecules implicated by GWAS are indicated in red.