The inextricable role of the kidney in hypertension

The inextricable role of the kidney in hypertension

An essential link between the kidney and blood pressure control has long been known. Here, we review evidence supporting the premise that an impaired capacity of the kidney to excrete sodium in response to elevated blood pressure is a major contributor to hypertension, irrespective of the initiating cause. In this regard, recent work suggests that novel pathways controlling key sodium transporters in kidney epithelia have a critical impact on hypertension pathogenesis, supporting a model in which impaired renal sodium excretion is a final common pathway through which vascular, neural, and inflammatory responses raise blood pressure. We also address recent findings calling into question long-standing notions regarding the relationship between sodium intake and changes in body fluid volume. Expanded understanding of the role of the kidney as both a cause and target of hypertension highlights key aspects of pathophysiology and may lead to identification of new strategies for prevention and treatment.

Mechanisms regulating sodium and potassium flux in the distal nephron. 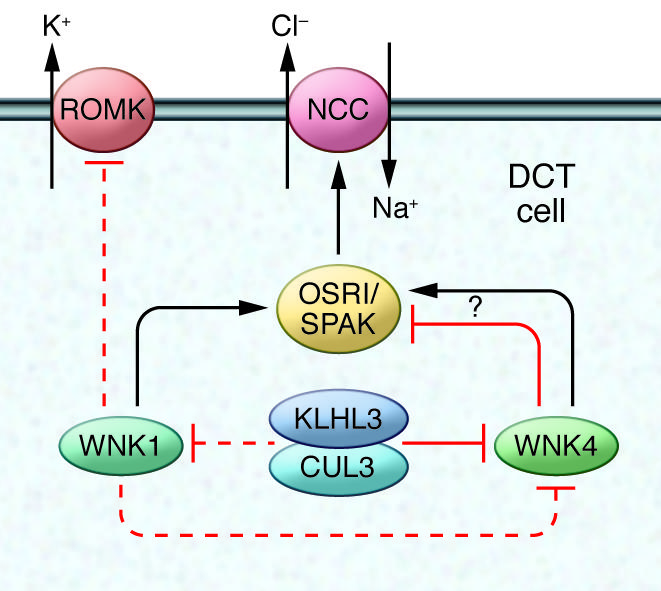 WNK family kinases control the activity of the sodium chloride cotransporter (NCC) and the renal outer medullary potassium channel (ROMK) in distal convoluted tubule (DCT) cells in the kidney. WNK1 phosphorylates and stimulates the SPS1-related proline/alanine-rich kinase (SPAK) and oxidative stress-responsive kinase 1 (OSR1) protein kinases, which in turn, promotes NCC-dependent sodium transport. WNK1 may also inhibit ROMK. WNK4 inhibits ROMK but has been reported to have both stimulating and inhibitory actions on NCC depending on the experimental system used. Levels of WNK4 are regulated by the activity of the cullin 3-KLHL3 ubiquitin ligase, which has also been suggested to modulate WNK1. Individual mutations in WNK1, WNK4, cullin 3, and KLHL3 generate a similar phenotype: the syndrome of pseudo-hypoaldosteronism type II (PHAII), a Mendelian syndrome characterized by the unusual combination of hypertension and hyperkalemia, highlighting the continuity and importance of this pathway in the normal control of sodium and potassium handling in the distal nephron.