Amyotrophic lateral sclerosis (ALS) is a devastating degenerative disease characterized by progressive loss of motor neurons in the motor cortex, brainstem, and spinal cord. Although defined as a motor disorder, ALS can arise concurrently with frontotemporal lobal dementia (FTLD). ALS begins focally but disseminates to cause paralysis and death. About 10% of ALS cases are caused by gene mutations, and more than 40 ALS-associated genes have been identified. While important questions about the biology of this disease remain unanswered, investigations of ALS genes have delineated pathogenic roles for (a) perturbations in protein stability and degradation, (b) altered homeostasis of critical RNA- and DNA-binding proteins, (c) impaired cytoskeleton function, and (d) non-neuronal cells as modifiers of the ALS phenotype. The rapidity of progress in ALS genetics and the subsequent acquisition of insights into the molecular biology of these genes provide grounds for optimism that meaningful therapies for ALS are attainable.

Disruption of neuroaxonal structure and axonal vesicle trafficking in ALS. 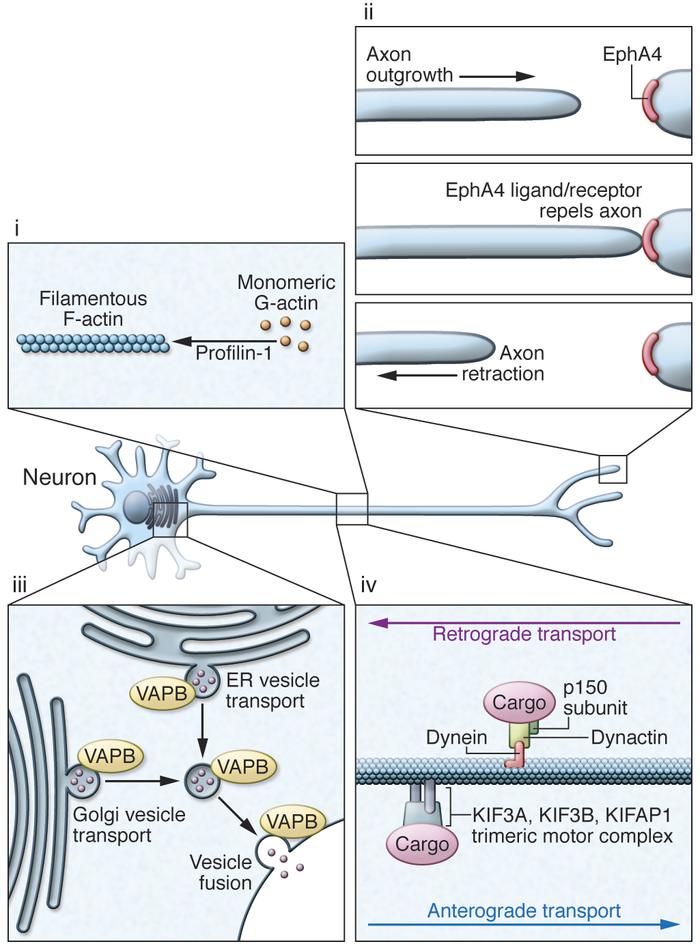 (i) Mutations in profilin-1 disrupt multiple functions of this protein, including its role in facilitating polymerization of monomeric G-actin to its filamentous F-actin form. (ii) Reduced expression of EphA4 correlates with increased survival in sALS, hypothetically through reducing this protein’s normal activity in signaling axon repulsion and arresting axonal growth. Reduction in levels of EphA4 or its activity is believed to enhance the capacity of a distal motor terminal to extend, remodel, and potentially reinnervate the target muscle. (iii) Disruption in endocytosis and the transport of vesicles from the golgi apparatus and ER are a likely consequence of ALS-associated mutations in VAPB. (iv) Mutations have been detected in the p150 subunit of dynactin, which is required for tethering cargos to the dynein retrograde transport complex. Some studies have suggested that altered expression of KIFAP1 enhances ALS risk by impairing function of the anterograde transport motor complex.