Amyotrophic lateral sclerosis (ALS) is a devastating degenerative disease characterized by progressive loss of motor neurons in the motor cortex, brainstem, and spinal cord. Although defined as a motor disorder, ALS can arise concurrently with frontotemporal lobal dementia (FTLD). ALS begins focally but disseminates to cause paralysis and death. About 10% of ALS cases are caused by gene mutations, and more than 40 ALS-associated genes have been identified. While important questions about the biology of this disease remain unanswered, investigations of ALS genes have delineated pathogenic roles for (a) perturbations in protein stability and degradation, (b) altered homeostasis of critical RNA- and DNA-binding proteins, (c) impaired cytoskeleton function, and (d) non-neuronal cells as modifiers of the ALS phenotype. The rapidity of progress in ALS genetics and the subsequent acquisition of insights into the molecular biology of these genes provide grounds for optimism that meaningful therapies for ALS are attainable. 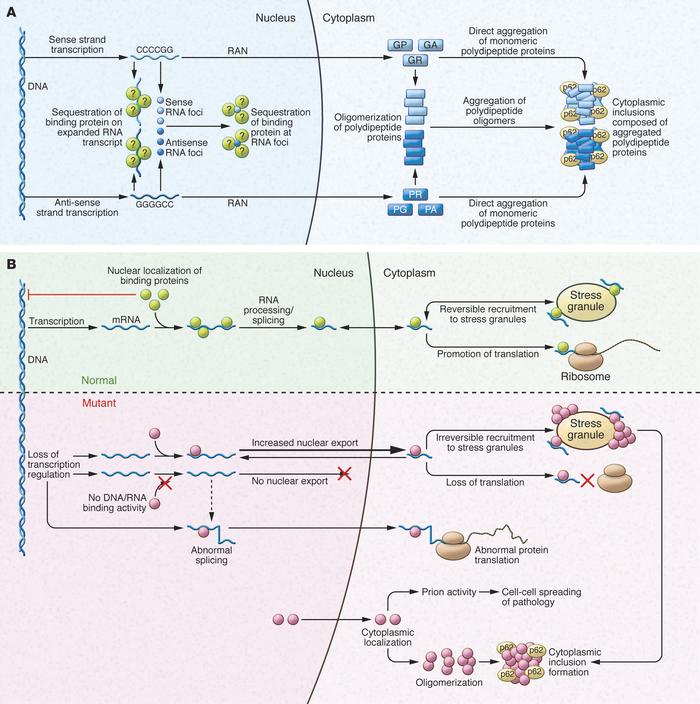 () The mutant gene associated with fALS contains an intronic G4C2 motif often expanded to several hundred (and even several thousand) repeats. This GC-rich domain is transcribed in both the sense and antisense directions, producing mRNA prone to forming large intranuclear foci that are believed to sequester some RNA-binding proteins. The sense or antisense transcripts undergo noncanonical RAN translation in all six possible reading frames, generating five dipeptide-repeat peptides (GA, GR, GP, PR, PA), which form inclusions that are associated with the protein p62. () Under normal conditions, the DNA/RNA-binding proteins mutated in fALS, most notably TDP-43 and FUS, are typically located within the nucleus, where they serve multiple functions. These proteins are also able to translocate to the cytoplasm, where they may localize to stress granules under some adverse cellular conditions. When these proteins are defective (e.g., bearing ALS-related mutations) the normal range of interactions with DNA and RNA are disrupted; this can lead to marked changes in transcription, splicing, and translation. Furthermore, the presence of the low-complexity, prion-like domains is thought to facilitate oligomer self-assembly under conditions of cellular stress, thereby promoting prion-like toxicity and intercellular spread.