The differing tempo of growth in bone size, mass, and density in girls is region-specific

The differing tempo of growth in bone size, mass, and density in girls is region-specific

The differing tempo and direction of growth of the periosteal and endocortical surfaces, and the differing tempo of growth of the axial and appendicular skeleton, may predispose to regional deficits in bone size, bone mineral content (BMC), and volumetric bone mineral density (vBMD). These traits were measured during 2 years by dual x-ray absorptiometry in 109 girls. By 7 years of age, bone size was approximately 80% of its maturational peak, and BMC was approximately 40% of its peak. Before puberty, the legs grew more rapidly than the trunk. During puberty, the growth spurt was truncal. Between 7 and 17 years, femoral and lumbar spine BMC increased by 50–150% because bone size increased. vBMD increased by 10–30%. Thus, growth builds a bigger, but only moderately denser, skeleton. Regions growing rapidly, or distant from their peak, may be more severely affected by illness than those growing slowly or nearer completion of growth. Depending on the age of exposure to disease, deficits may occur in limb dimensions (prepuberty), spine dimensions (early puberty), or vBMD by interference with mineral accrual (late puberty). As vBMD is independent of age before puberty, the position of an individual’s vBMD in the population distribution is established early in life. Bone fragility in old age may have its foundations in growth. 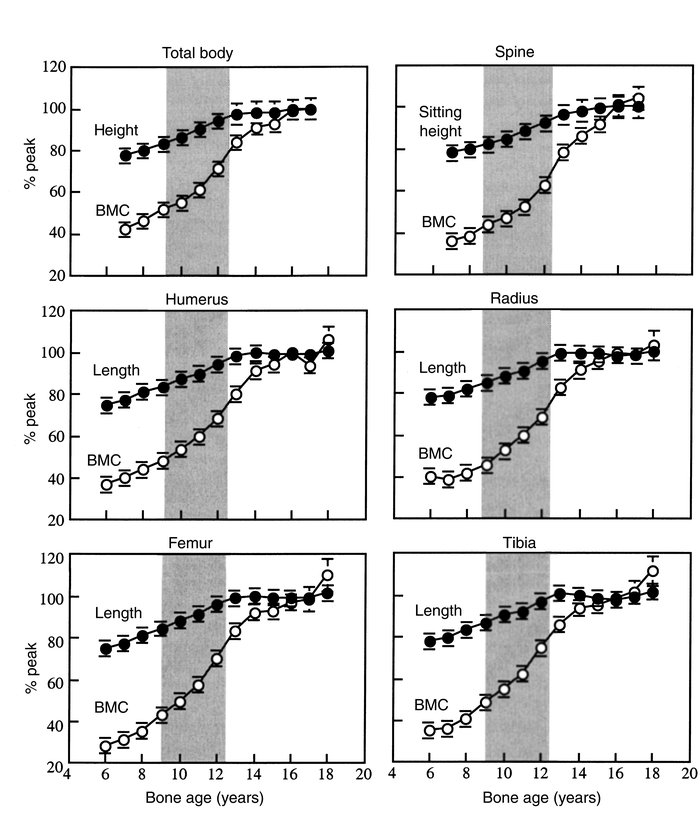