Hirschsprung disease (HSCR) is a partially penetrant oligogenic birth defect that occurs when enteric nervous system (ENS) precursors fail to colonize the distal bowel during early pregnancy. Genetic defects underlie HSCR, but much of the variability in the occurrence and severity of the birth defect remain unexplained. We hypothesized that nongenetic factors might contribute to disease development. Here we found that mycophenolate, an inhibitor of de novo guanine nucleotide biosynthesis, and 8 other drugs identified in a zebrafish screen impaired ENS development. In mice, mycophenolate treatment selectively impaired ENS precursor proliferation, delayed precursor migration, and induced bowel aganglionosis. In 2 different mouse models of HSCR, addition of mycophenolate increased the penetrance and severity of Hirschsprung-like pathology. Mycophenolate treatment also reduced ENS precursor migration as well as lamellipodia formation, proliferation, and survival in cultured enteric neural crest–derived cells. Using X-inactivation mosaicism for the purine salvage gene , we found that reduced ENS precursor proliferation most likely causes mycophenolate-induced migration defects and aganglionosis. To the best of our knowledge, mycophenolate is the first medicine identified that causes major ENS malformations and Hirschsprung-like pathology in a mammalian model. These studies demonstrate a critical role for de novo guanine nucleotide biosynthesis in ENS development and suggest that some cases of HSCR may be preventable.

MMF treatment interacts with and mutations to increase penetrance and severity of HSCR-like pathology. 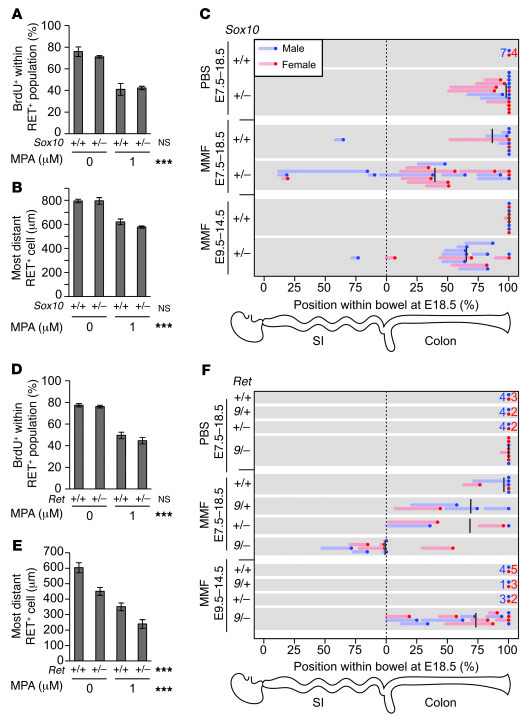 ( and ) MPA treatment in 24-hour explant cultures revealed that neither nor heterozygosity affected BrdU incorporation. ( and ) In contrast, but not heterozygosity reduced ENCDC migration distance, and MPA treatment had an additive effect on ENCDC migration distance. Interaction terms were not statistically significant. ( and ) Pregnant dams were provided MMF or control PBS in drinking water, and the ENS was examined at E18.5 with neuronal fiber (TuJ1) and soma (HuC/HuD) markers. The position of the most caudal soma within the intestine is plotted as a dot, and the region of hypoganglionosis is plotted as a line. Mean positions of aganglionosis are denoted by black lines. Groups without abnormal fetuses are summarized as 1 dot and number. Treatment with MMF from E7.5 to E18.5 resulted in hypoganglionosis and aganglionosis with genotype-dependant penetrance and severity. Treatment with MMF from E9.5 to E14.5 demonstrated genotype-dependent reversal of the MMF-induced developmental delays. *** < 0.001, 2-way ANOVA (, , , and ).