RUNX1 is generally considered a tumor suppressor in myeloid neoplasms. Inactivating RUNX1 mutations have frequently been found in patients with myelodysplastic syndrome (MDS) and cytogenetically normal acute myeloid leukemia (AML). However, no somatic RUNX1 alteration was found in AMLs with leukemogenic fusion proteins, such as core-binding factor (CBF) leukemia and MLL fusion leukemia, raising the possibility that RUNX1 could actually promote the growth of these leukemia cells. Using normal human cord blood cells and those expressing leukemogenic fusion proteins, we discovered a dual role of RUNX1 in myeloid leukemogenesis. RUNX1 overexpression inhibited the growth of normal cord blood cells by inducing myeloid differentiation, whereas a certain level of RUNX1 activity was required for the growth of AML1-ETO and MLL-AF9 cells. Using a mouse genetic model, we also showed that the combined loss of inhibited leukemia development induced by MLL-AF9. RUNX2 could compensate for the loss of RUNX1. The survival effect of RUNX1 was mediated by BCL2 in MLL fusion leukemia. Our study unveiled an unexpected prosurvival role for RUNX1 in myeloid leukemogenesis. Inhibiting RUNX1 activity rather than enhancing it could be a promising therapeutic strategy for AMLs with leukemogenic fusion proteins. 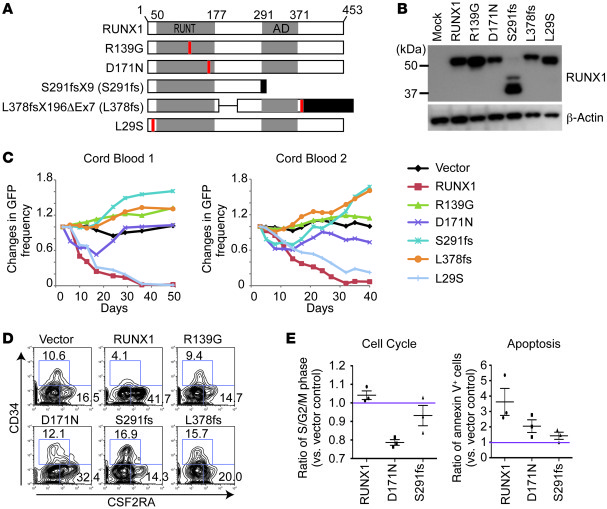 () Schematic presentation of RUNX1 and its mutants. RUNT, RUNT domain; AD, transcription activation domain. () Expression of the individual proteins was confirmed in CB cells. () Changes in frequency of GFP+ cells (vector/RUNX1/mutant-expressing cells) in two independent CB cell cultures. RUNX1 and the L29S mutant inhibited the growth of CB cells, while other mutants did not. () CD34 and CSF2RA expression in vector/RUNX1/mutant-transduced cells on day 7 of culture. GFP+ cells were gated and analyzed. The percentage of cells in each gate (CD34+ or CSF2RA+ cells) is indicated. () CB cells were transduced with vector, RUNX1, or its mutants (D171N and S291fs) and were cultured with cytokines. Cell cycle status and apoptosis were assessed on days 5 through 7 of culture. The frequency of S/G2/M phase cells in GFP+ cells (transduced cells) was first normalized to that in GFP– cells (nontransduced cells) and then was normalized to that of the vector control. For apoptosis, the frequency of annexin V+ cells in GFP+ cells was normalized to that of the vector control. Three independent experiments were performed, and data are shown as the mean ± SEM.