Renal function is perturbed by inhibition of nitric oxide synthase (NOS). To probe the basis of this effect, we characterized the effects of nitric oxide (NO), a known suppressor of cytochrome P450 (CYP) enzymes, on metabolism of arachidonic acid (AA), the expression of ω-hydroxylase, and the efflux of 20-hydroxyeicosatetraenoic acid (20-HETE) from the isolated kidney. The capacity to convert [14C]AA to HETEs and epoxides (EETs) was greater in cortical microsomes than in medullary microsomes. Sodium nitroprusside (10–100 μM), an NO donor, inhibited renal microsomal conversion of [14C]AA to HETEs and EETs in a dose-dependent manner. 8-bromo cGMP (100 μM), the cell-permeable analogue of cGMP, did not affect conversion of [14C]AA. Inhibition of NOS with Nω-nitro-L-arginine-methyl ester (L-NAME) significantly increased conversion of [14C]AA to HETE and greatly increased the expression of ω-hydroxylase protein, but this treatment had only a modest effect on epoxygenase activity. L-NAME induced a 4-fold increase in renal efflux of 20-HETE, as did L-nitroarginine. Oral treatment with 2% sodium chloride (NaCl) for 7 days increased renal epoxygenase activity, both in the cortex and the medulla. In contrast, cortical ω-hydroxylase activity was reduced by treatment with 2% NaCl. Coadministration of L-NAME and 2% NaCl decreased conversion of [14C]AA to HETEs without affecting epoxygenase activity. Thus, inhibition of NOS increased ω-hydroxylase activity, CYP4A expression, and renal efflux of 20-HETE, whereas 2% NaCl stimulated epoxygenase activity. 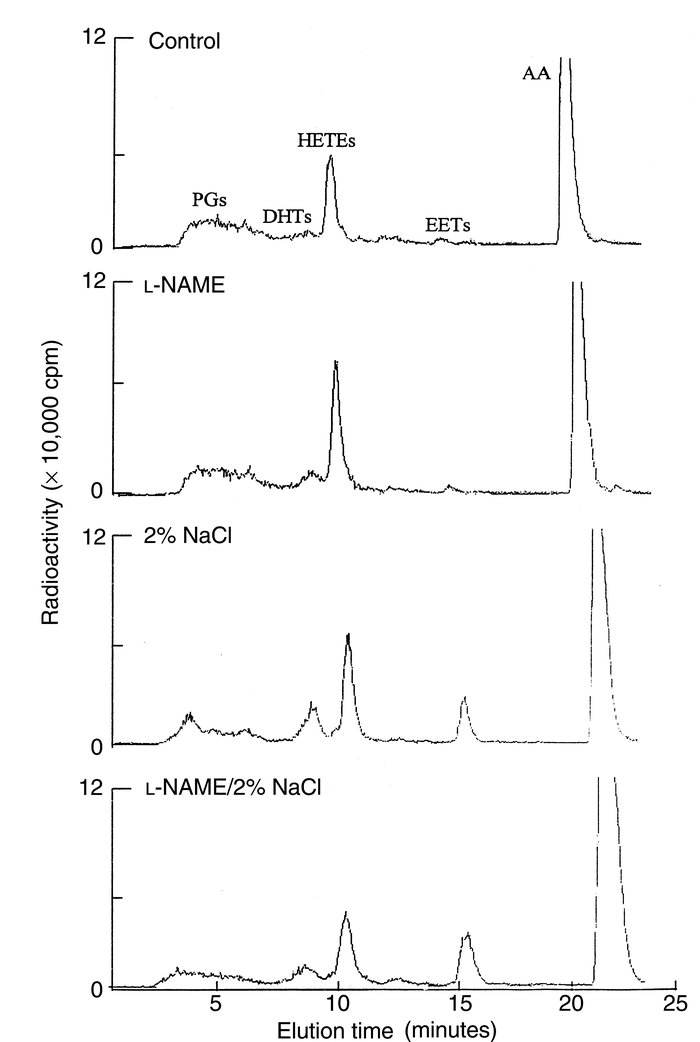 Representative reverse-phase HPLC chromatograms of [14C]AA metabolites formed by renal microsomes in untreated control rats (top) and rats treated with -NAME or NaCl only (middle) or -NAME and 2% NaCl (bottom).