Tendon formation and repair rely on specific combinations of transcription factors, growth factors, and mechanical parameters that regulate the production and spatial organization of type I collagen. Here, we investigated the function of the zinc finger transcription factor EGR1 in tendon formation, healing, and repair using rodent animal models and mesenchymal stem cells (MSCs). Adult tendons of mice displayed a deficiency in the expression of tendon genes, including , , and , and were mechanically weaker compared with their WT littermates. EGR1 was recruited to the and promoters in postnatal mouse tendons in vivo. was required for the normal gene response following tendon injury in a mouse model of Achilles tendon healing. Forced expression programmed MSCs toward the tendon lineage and promoted the formation of in vitro–engineered tendons from MSCs. The application of EGR1-producing MSCs increased the formation of tendon-like tissues in a rat model of Achilles tendon injury. We provide evidence that the ability of EGR1 to promote tendon differentiation is partially mediated by TGF-β2. This study demonstrates EGR1 involvement in adult tendon formation, healing, and repair and identifies as a putative target in tendon repair strategies.

EGR1-producing C3H10T1/2 cells increase the expression of tendon markers and lose their capacity to differentiate into bone and fat lineages. 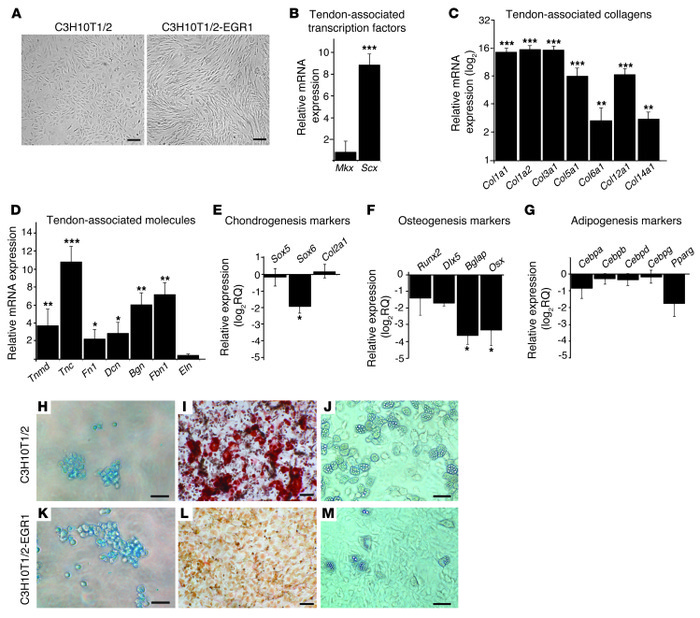