log-log dose-response curves illustrating the effects of the PIs ATV, DRV, and LPV on budding and entry. 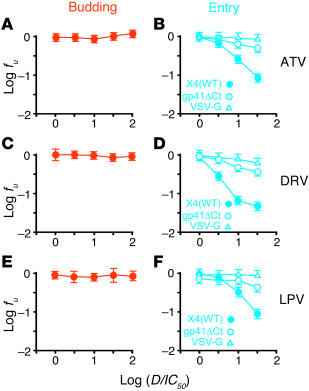 (, , and ) Budding was assessed by quantifying virus particles in the supernatants of cultures of 293T cells transfected with a proviral construct. (, , and ) Entry was measured by FRET using BLAM-–loaded pseudoviruses with WT HIV-1 Env (filled circles), HIV-1 Env with a truncated CT (open circles), or VSV-G (triangles). Drug concentrations were normalized by previously measured values for inhibition of infectivity by each drug (13.6 nM, 23.6 nM, and 35.8 nM for ATV, DRV, and LPV, respectively, ref. ).