infections are nearly universal among children in low-income countries and are syndemic with the triumvirate of malnutrition, diarrhea, and developmental growth delays. Amidst the morass of early childhood enteropathogen exposures in these populations, –specific associations with persistent diarrhea, cognitive deficits, stunting, and nutrient deficiencies have demonstrated conflicting results, placing endemic pediatric giardiasis in a state of equipoise. Many infections in endemic settings appear to be asymptomatic/subclinical, further contributing to uncertainty regarding a causal link between infection and developmental delay. We used H3 cyst infection in a weaned mouse model of malnutrition to demonstrate that persistent giardiasis leads to epithelial cell apoptosis and crypt hyperplasia. Infection was associated with a Th2-biased inflammatory response and impaired growth. Malnutrition accentuated the severity of these growth decrements. Faltering malnourished mice exhibited impaired compensatory responses following infection and demonstrated an absence of crypt hyperplasia and subsequently blunted villus architecture. Concomitantly, severe malnutrition prevented increases in B220+ cells in the lamina propria as well as mucosal and mRNA in response to infection. These findings add insight into the potential role of as a “stunting” pathogen and suggest that, similarly, malnourished children may be at increased risk of –potentiated growth decrements. 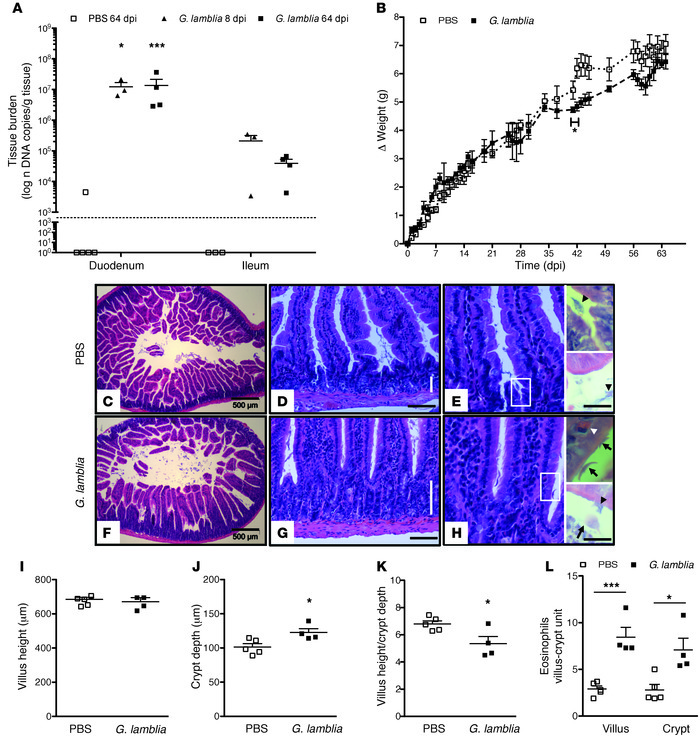