Metformin is widely prescribed for the treatment of type II diabetes. Recently, it has been proposed that this compound or related biguanides may have antineoplastic activity. Biguanides may exploit specific metabolic vulnerabilities of transformed cells by acting on them directly, or may act by indirect mechanisms that involve alterations of the host environment. Preclinical data suggest that drug exposure levels are a key determinant of proposed direct actions. With respect to indirect mechanisms, it will be important to determine whether recently demonstrated metformin-induced changes in levels of candidate systemic mediators such as insulin or inflammatory cytokines are of sufficient magnitude to achieve therapeutic benefit. Results of the first generation of clinical trials now in progress are eagerly anticipated. Ongoing investigations may justify a second generation of trials that explore pharmacokinetic optimization, rational drug combinations, synthetic lethality strategies, novel biguanides, and the use of predictive biomarkers. 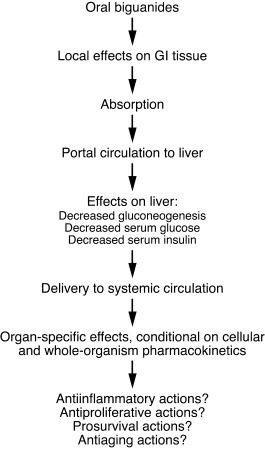 Following oral administration, biguanides have local effects on the GI tract, including the colon, as the luminal concentration can exceed the serum concentration. This elevated concentration may explain observed antiproliferative effects of metformin on colon epithelial cells (, ). Absorbed drugs are initially routed to the liver via the portal circulation, and this organ is exposed to high concentrations relative to others, not only because it receives portal circulation, but also because hepatocytes express high levels of cell surface transport molecules such as OCT1 required for the import of biguanides such as metformin. In liver, gluconeogenesis is inhibited, leading to declines in circulating glucose and insulin, particularly in the setting of elevated baseline levels. A variety of actions may also occur in other organs, including potentially antiinflammatory actions (), antiproliferative actions (), prosurvival actions (), and antiaging actions (). However, these effects are dependent on adequate drug levels, and knowledge concerning organ-specific pharmacokinetics of metformin is incomplete.