The inhibitory receptor programmed cell death 1 (PD-1) plays a major role in functional exhaustion of T cells during chronic infections and cancer, and recent clinical data suggest that blockade of the PD-1 pathway is an effective immunotherapy in treating certain cancers. Thus, it is important to define combinatorial approaches that increase the efficacy of PD-1 blockade. To address this issue, we examined the effect of IL-2 and PD-1 ligand 1 (PD-L1) blockade in the mouse model of chronic lymphocytic choriomeningitis virus (LCMV) infection. We found that low-dose IL-2 administration alone enhanced CD8+ T cell responses in chronically infected mice. IL-2 treatment also decreased inhibitory receptor levels on virus-specific CD8+ T cells and increased expression of CD127 and CD44, resulting in a phenotype resembling that of memory T cells. Surprisingly, IL-2 therapy had only a minimal effect on reducing viral load. However, combining IL-2 treatment with blockade of the PD-1 inhibitory pathway had striking synergistic effects in enhancing virus-specific CD8+ T cell responses and decreasing viral load. Interestingly, this reduction in viral load occurred despite increased numbers of Tregs. These results suggest that combined IL-2 therapy and PD-L1 blockade merits consideration as a regimen for treating human chronic infections and cancer. 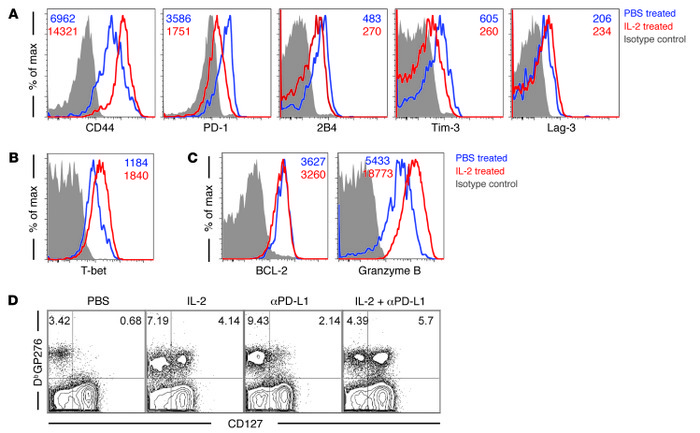 2 × 103 Thy1.1+ DbGP33 LCMV-specific CD8 T cells (P14 transgenic) were transferred i.v. into C57/BL6 mice (Thy1.2+) that were subsequently infected with LCMV cl-13, and beginning on day 23 to 27 after infection, the mice were treated with either PBS or 1.5 × 103 IU IL-2 (i.p.) every 24 hours for 8 days. After the end of treatment, the splenocytes were removed and stained with Thy1.1, CD8, CD44, and the indicated antibodies. The MFI of the markers is indicated by numbers in the histograms. Representative histograms showing the expression of () CD44 and the inhibitory receptors, () intracellular T-bet expression, and () intracellular Bcl-2 and granzyme B expression 1 day after the last PBS or IL-2 treatment. () C57/BL6 mice were infected with LCMV cl-13. 23–27 days after infection, the appropriate mice were treated with either isotype control antibody or anti–PD-L1 (every 3 days for 5 total treatments), and 1.5 × 103 IU IL-2 was given to the appropriate groups every 24 hours for the last 8 days of anti–PD-L1 treatment. Representative dot plots showing CD127 expression on DbGP276 tetramer CD8 T cells at 3 weeks after end of anti–PD-L1 and IL-2 treatment. (–) Results are representative of 2 independent experiments, with at least 5 mice per group, or () 3 independent experiments, with at least 4 mice per group.