The transition to puberty and adult fertility both require a minimum level of energy availability. The adipocyte-derived hormone leptin signals the long-term status of peripheral energy stores and serves as a key metabolic messenger to the neuroendocrine reproductive axis. Humans and mice lacking leptin or its receptor fail to complete puberty and are infertile. Restoration of leptin levels in these individuals promotes sexual maturation, which requires the pulsatile, coordinated delivery of gonadotropin-releasing hormone to the pituitary and the resulting surge of luteinizing hormone (LH); however, the neural circuits that control the leptin-mediated induction of the reproductive axis are not fully understood. Here, we found that leptin coordinated fertility by acting on neurons in the preoptic region of the hypothalamus and inducing the synthesis of the freely diffusible volume-based transmitter NO, through the activation of neuronal NO synthase (nNOS) in these neurons. The deletion of the gene encoding nNOS or its pharmacological inhibition in the preoptic region blunted the stimulatory action of exogenous leptin on LH secretion and prevented the restoration of fertility in leptin-deficient female mice by leptin treatment. Together, these data indicate that leptin plays a central role in regulating the hypothalamo-pituitary-gonadal axis in vivo through the activation of nNOS in neurons of the preoptic region. 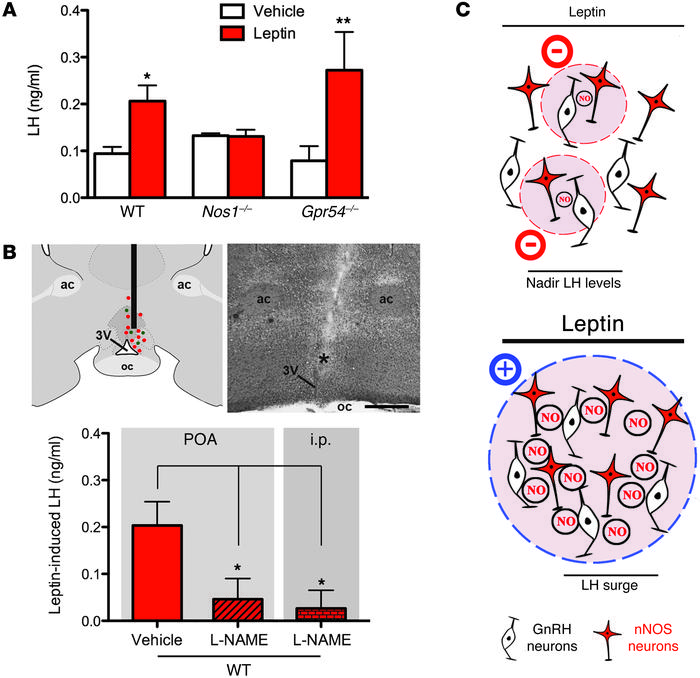 () nNOS activity is required for leptin-induced LH release, independently of kisspeptin/GPR54 signaling. () The pharmacological inhibition of nNOS, specifically within the preoptic region (POA), is sufficient to block leptin-induced LH release. The diagram and the corresponding photomicrograph show the target site into which -NAME was stereotaxically infused in the preoptic region, in which GnRH (green dots) and nNOS (red dots) neuronal cell bodies are intermingled. ac, anterior commissure. The asterisk in the image indicates the trajectory of the implanted needle. Scale bar: 500 μm. () Schematic representation of the hypothetical mechanisms of regulation of LH secretion in the absence (top panel) or presence (bottom panel) of exogenous leptin treatment in diestrus mice (see Supplemental Figure 2 for mathematical modeling). * < 0.05, ** < 0.01.