Defending the cornea with antibacterial fragments of keratin

Defending the cornea with antibacterial fragments of keratin

In addition to its role in refraction, the cornea forms a barrier between the eye and environmental and infectious insults. Corneal infections are surprisingly rare, suggesting that multiple aspects of the immune system are at play in mediating protection. In this issue of the JCI, Tam et al. describe the unexpected role of a structural protein, cytokeratin 6A, in this process. 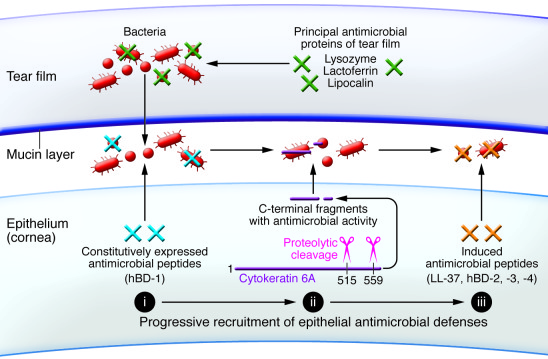 The epithelium of the cornea is depicted with an overlying mucus layer. A hypothetical progressive sequence is presented in which successive antimicrobial defenses are recruited. The tear film proteins, lysozyme, lactoferrin, and lipocalin create an environment that is nonoptimal for microbial growth. The mucin layer, derived from mucins secreted by the epithelium, creates a physical barrier that microbes must overcome in order to invade the cornea. (i) Should a microbe penetrate the mucin layer, it faces constitutively expressed antimicrobial peptides, such as human β-defensin-1 (hBD-1). (ii) If the microbe gains access to the epithelium, we imagine that cytokeratin fragmentation, as described by Tam et al., generated by cleavage of a preexisting abundant protein, is rapidly mobilized. (iii) Expression of a battery of antimicrobial peptides is subsequently induced over the course of hours.