HIV-1 accumulates mutations in and around reactive epitopes to escape recognition and killing by CD8+ T cells. Measurements of HIV-1 time to escape should therefore provide information on which parameters are most important for T cell–mediated in vivo control of HIV-1. Primary HIV-1–specific T cell responses were fully mapped in 17 individuals, and the time to virus escape, which ranged from days to years, was measured for each epitope. While higher magnitude of an individual T cell response was associated with more rapid escape, the most significant T cell measure was its relative immunodominance measured in acute infection. This identified subject-level or “vertical” immunodominance as the primary determinant of in vivo CD8+ T cell pressure in HIV-1 infection. Conversely, escape was slowed significantly by lower population variability, or entropy, of the epitope targeted. Immunodominance and epitope entropy combined to explain half of all the variability in time to escape. These data explain how CD8+ T cells can exert significant and sustained HIV-1 pressure even when escape is very slow and that within an individual, the impacts of other T cell factors on HIV-1 escape should be considered in the context of immunodominance.

M, immunodominance (%M), breadth, and the epitope entropy of the HIV-1–specific T cell response all contribute to time to escape. 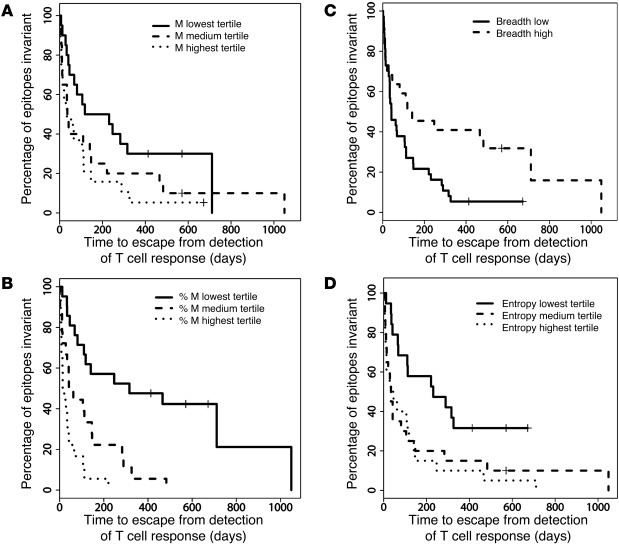 Univariate correlations of time to escape with () magnitude (M), () %M of the T cell response, and () T cell breadth and () entropy of the epitope targeted by the T cell response. T cell data are restricted to the first HIV-1–specific T cell responses detected using IFN-γ ELISpot detected within 50 days of Fiebig stages I/II. Time to virus escape was calculated from the time of first detection of the T cell response and time to 50% change in SGA sequences compared with the T/F sequence. Data were resolved into tertiles in , , and and median in . See Supplemental Table 2 for risk ratios and values using CPH models.