Homeostatic processing genes with decreased expression in A/J mice display protein expression in RPE and photoreceptor compartments of the retina. 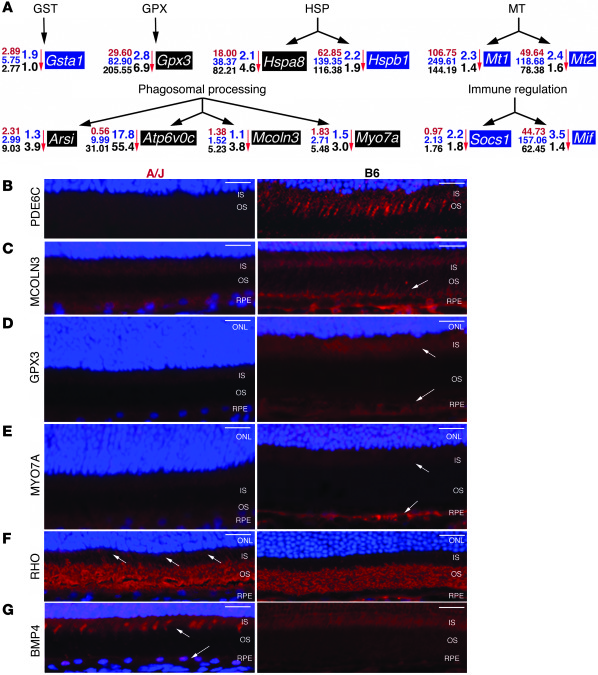 () Expression of genes of the GST, GPX, HSP, and MT families, as well as genes involved in phagosomal processing and in immune regulation, exhibited markedly decreased expression in A/J compared with both BALB/c and B6 mice. Numbers at left of each gene represent the RNA-Seq FPKM values from A/J (red), BALB/c (blue), and B6 (black) eyes; fold difference in A/J versus BALB/c (top; blue) and A/J versus B6 (bottom; black) is indicated next to each vertical arrow. Blue shading denotes genes with greater expression in BALB/c; black shading denotes genes with greater expression in B6. (–) IHC of 1-month-old A/J and B6 retinas was done with () PDE6C, cone cell marker; () MCOLN3, involved in lysosomal degradation; () GPX3, involved in ROS detoxification; () MYO7A, involved in protein trafficking; () RHO, visual pigment in rod photoreceptors; and () BMP4, marker of RPE cell senescence. MCOLN3, GPX3, and MYO7A staining was much more pronounced in B6 RPE (arrows in –). The aberrant nature of the A/J RPE cell was evidenced by mislocalization of RHO, as evidenced by signals in both the outer and inner segment (OS and IS, respectively; arrows in ) and increased expression of BMP4 in inner segment and RPE (arrows in ) in A/J mice. Scale bars: 20 μm.