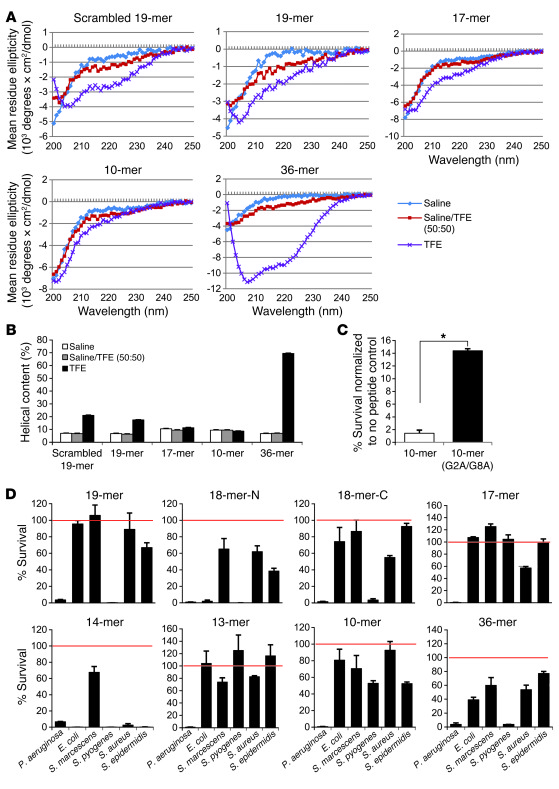 () CD spectra of scrambled 19-mer (nonbactericidal control) as well as 19-mer, 17-mer, 10-mer, and 36-mer (bactericidal) in water, water/TFE (50:50), or TFE. Only 36-mer showed induced helical structure in TFE, others (with or without bactericidal activity) remained unstructured random coil-like peptides. () Analysis of the spectra using the K2D2 program () confirmed low to negligible helical content of scrambled 19-mer, active 19-mer, 17-mer, and 10-mer. () Glycine-to-alanine mutations (G2A and G8A) in the 10–amino acid peptide resulted in marked decrease of bactericidal activity against strain 6206 (* < 0.0001). () Activity spectra of the K6A-derived peptides against various Gram-positive and Gram-negative pathogenic or commensal bacteria. The 19-mer K6A-derived peptide showed even greater bactericidal activity against than (200 μg/ml, 3 hours), but activity was lost with removal of C- and N-terminal amino acids from 19-mer (17-mer peptide). was found to be susceptible to killing by the 14-mer and 18-mer-N, while was only minimally susceptible. and were both susceptible to killing by the 14-mer.