Hematopoietic stem progenitor cells (HSPCs) are present in very small numbers in the circulating blood in steady-state conditions. In response to stress or injury, HSPCs are primed to migrate out of their niche to peripheral blood. Mobilized HSPCs are now commonly used as stem cell sources due to faster engraftment and reduced risk of posttransplant infection. In this study, we demonstrated that a nucleotide sugar, UDP-glucose, which is released into extracellular fluids in response to stress, mediates HSPC mobilization. UDP-glucose–mobilized cells possessed the capacity to achieve long-term repopulation in lethally irradiated animals and the ability to differentiate into multi-lineage blood cells. Compared with G-CSF–mobilized cells, UDP-glucose–mobilized cells preferentially supported long-term repopulation and exhibited lymphoid-biased differentiation, suggesting that UDP-glucose triggers the mobilization of functionally distinct subsets of HSPCs. Furthermore, co-administration of UDP-glucose and G-CSF led to greater HSPC mobilization than G-CSF alone. Administration of the antioxidant agent NAC significantly reduced UDP-glucose–induced mobilization, coinciding with a reduction in RANKL and osteoclastogenesis. These findings provide direct evidence demonstrating a potential role for UDP-glucose in HSPC mobilization and may provide an attractive strategy to improve the yield of stem cells in poor-mobilizing allogeneic or autologous donors. 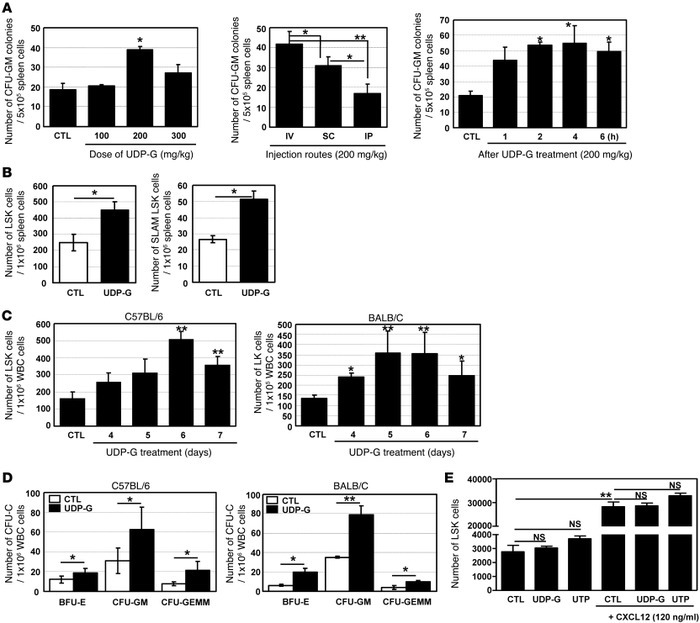 () The effects of doses and injection routes were determined. The effect of UDP-Glc peaked 2–4 hours after UDP-Glc injection, thus PB cells were collected 2–4 hours after the last injection in all experiments unless otherwise stated. () B6 mice were injected once daily for 6 days with UDP-Glc (UDP-G, 200 mg/kg) or vehicle (CTL). Single-cell suspensions from spleens were stained for LSK and SLAM LSK and the number of HSPCs enumerated. () B6 and BALB/C mice were injected daily with UDP-Glc (200 mg/kg), control mice with vehicle. PB was drawn at the indicated time points and LSK cells quantified. Lin–c-Kit+ (LK) subsets were quantified in BALB/C mice, which express low or no Sca-1. () B6 and BALB/C mice were treated once daily for 6 days with vehicle or UDP-Glc, PB cells harvested, and CFU-C activity measured. () Chemotaxis assays were performed using 5-μm-pore filters. Lin– bone marrow cells from B6 mice were placed in the upper well (106/well) and CXCL12 (120 ng/ml), UDP-Glc (10 μM), or UTP (10 μM) in lower wells. After 6 hours of incubation, cells were collected from lower wells and LSK cells counted; cell migration was not significantly different at UDP-Glc concentrations of 1, 10, and 50 μM. * < 0.05, ** < 0.01. Data are mean ± SD and reflect 3 independent experiments in , , and and 2 independent experiments in (duplicate wells/treatment for and ).