In Lyme disease, musculoskeletal symptoms can persist after treatment, which has led to the hypothesis that the causal organism itself may escape antibiotic therapy. The controversy that surrounds this question extends beyond patients, physicians, and scientists, as public health organizations struggle with how the disease should be diagnosed and treated. Is Lyme disease an infection that resolves, or is the spirochetal agent resilient and evasive? In this issue of the JCI, Bockenstedt et al. address this issue and present compelling evidence that the residues of nonviable spirochetes can persist in cartilaginous tissue long after treatment and may contribute to antibiotic-refractory Lyme arthritis. 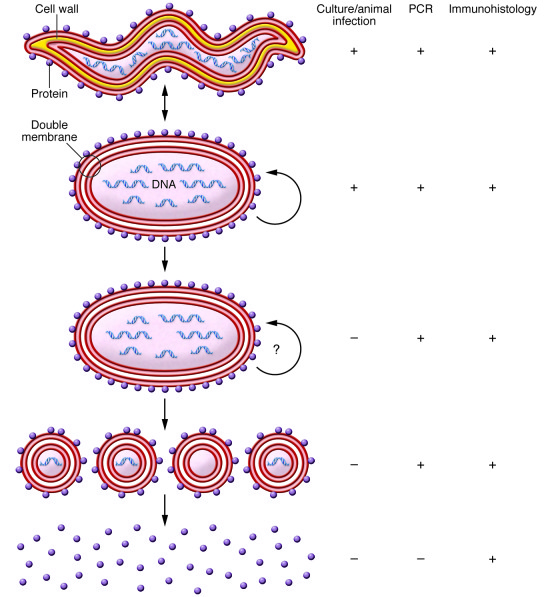 Following antibiotic treatment and host immune attack, an intact, replicating spirochete may descend to a state where only proteins of the bacteria remain detectable in the host tissue. The first transition is from the effect of a cell wall–active antibiotic. This can result in some cells that don’t have cell walls (also called L-forms or protoplasts) and, consequently, are not affected by the antibiotic anymore, but can still replicate (the circular arrow indicates replication of that form of cell). These cells can revert to normal bacteria with cell walls in the absence of the antibiotic. The next step down are intact cells that contain DNA and protein, but that cannot revert and may or not be able to replicate. Then there is autolysis or immune-mediated breakup of the bacteria into vesicles that contain both DNA and protein or protein alone (under these conditions, free DNA would be rapidly degraded by nucleases). Finally, with the destruction or turnover of the bacterial nucleic acid, only protein remains. The cells become spherical or pleomorphic in the absence of cell wall.