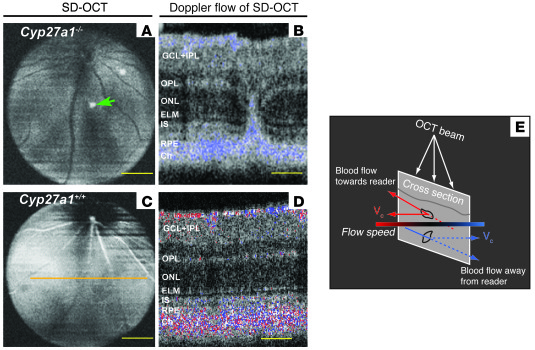 ( and ) Representative OCT fundus depth images (50° field of view) at the OPL in and mice, respectively. ( and ) Doppler flow of SD-OCT cross section through pathology in (indicated by green arrow) and the matching area in retina in (indicated by orange line). Red and blue colored pixels correspond to direction and relative magnitude of the vector component of blood flow perpendicular to the plane of the scan (VC in ). Areas with no flow are transparent and show the underlying SD-OCT imaging data. Scale bars: 300 μm ( and ); 60 μm ( and ).