Psoriasis is a chronic inflammatory disorder of the skin affecting approximately 2% of the world’s population. Accumulating evidence has revealed that the IL-23/IL-17/IL-22 pathway is key for development of skin immunopathology. However, the role of keratinocytes and their crosstalk with immune cells at the onset of disease remains poorly understood. Here, we show that IL-36R–deficient (Il36r–/–) mice were protected from imiquimod-induced expansion of dermal IL-17–producing γδ T cells and psoriasiform dermatitis. Furthermore, IL-36R antagonist-deficient (Il36rn–/–) mice showed exacerbated pathology. TLR7 ligation on DCs induced IL-36–mediated crosstalk with keratinocytes and dermal mesenchymal cells that was crucial for control of the pathological IL-23/IL-17/IL-22 axis and disease development. Notably, mice lacking IL-23, IL-17, or IL-22 were less well protected from disease compared with Il36r–/– mice, indicating an additional distinct activity of IL-36 beyond induction of the pathological IL-23 axis. Moreover, while the absence of IL-1R1 prevented neutrophil infiltration, it did not protect from acanthosis and hyperkeratosis, demonstrating that neutrophils are dispensable for disease manifestation. These results highlight a central and unique IL-1–independent role for IL-36 in control of the IL-23/IL-17/IL-22 pathway and development of psoriasiform dermatitis. 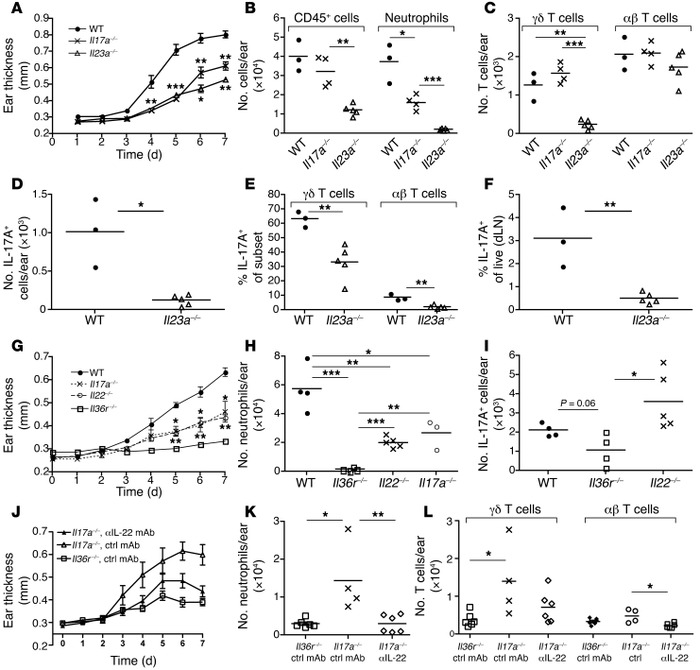 (, , and ) Ears of indicated groups of mice were treated with Aldara, and ear thickness was analyzed as described above. Values show averages ± SEM. Cell populations in the ear were characterized by flow cytometry at day 7. Total numbers of (, , and ) CD45+ hematopoietic cells and neutrophils, ( and ) γδ and αβ T cells, and ( and ) IL-17A–producing cells in ears of indicated mice. () Percentage of IL-17A producers among γδ and αβ T cells in ear lesions. () Percentage of IL-17A–producing cells gated on lymphocytes in dLNs. (–) mice treated with neutralizing anti–IL-22 or control (ctrl) mAb compared with mice treated with control mAb. (–, , , , and ) Symbols represent individual mice, and horizontal lines indicate averages of groups. * < 0.05; ** < 0.01; *** < 0.001.