Intrahepatic cholangiocarcinoma can arise from Notch-mediated conversion of hepatocytes

Intrahepatic cholangiocarcinoma can arise from Notch-mediated conversion of hepatocytes

Intrahepatic cholangiocarcinoma (ICC) is the second most common primary malignancy in the liver. ICC has been classified as a malignant tumor arising from cholangiocytes; however, the co-occurrence of ICC and viral hepatitis suggests that ICC originates in hepatocytes. In order to determine the cellular origin of ICC, we used a mouse model of ICC in which hepatocytes and cholangiocytes were labeled with heritable, cell type–specific reporters. Our studies reveal that ICC is generated by biliary lineage cells derived from hepatocytes, rather than cholangiocytes. Additionally, we found that Notch activation is critical for hepatocyte conversion into biliary lineage cells during the onset of ICC and its subsequent malignancy and progression. These findings will help to elucidate the pathogenic mechanism of ICC and to develop therapeutic strategies for this refractory disease.

Notch signal activation is significant not only for conversion of hepatocytes into biliary lineage cells at the onset of ICC, but also the malignancy and progression of ICC. 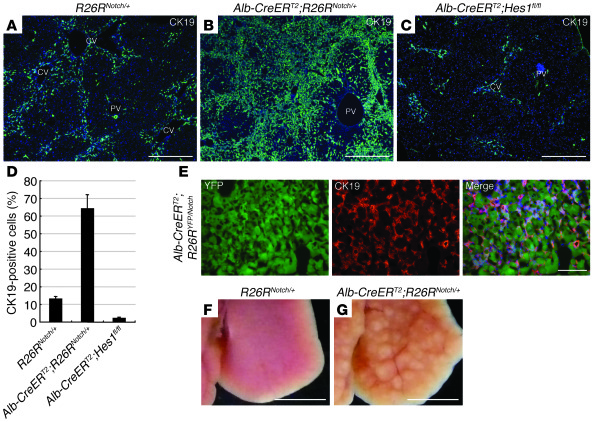