Serine palmitoyltransferase (SPT) is the first and rate-limiting enzyme of the de novo biosynthetic pathway of sphingomyelin (SM). Both SPT and SM have been implicated in the pathogenesis of atherosclerosis, the development of which is driven by macrophages; however, the role of SPT in macrophage-mediated atherogenesis is unknown. To address this issue, we have analyzed macrophage inflammatory responses and reverse cholesterol transport, 2 key mediators of atherogenesis, in SPT subunit 2–haploinsufficient () macrophages. We found that macrophages have significantly lower SM levels in plasma membrane and lipid rafts. This reduction not only impaired inflammatory responses triggered by TLR4 and its downstream NF-κB and MAPK pathways, but also enhanced reverse cholesterol transport mediated by ABC transporters. LDL receptor–deficient () mice transplanted with bone marrow cells exhibited significantly fewer atherosclerotic lesions after high-fat and high-cholesterol diet feeding. Additionally, mice with myeloid cell–specific haploinsufficiency exhibited significantly less atherosclerosis than controls. These findings suggest that SPT could be a novel therapeutic target in atherosclerosis. 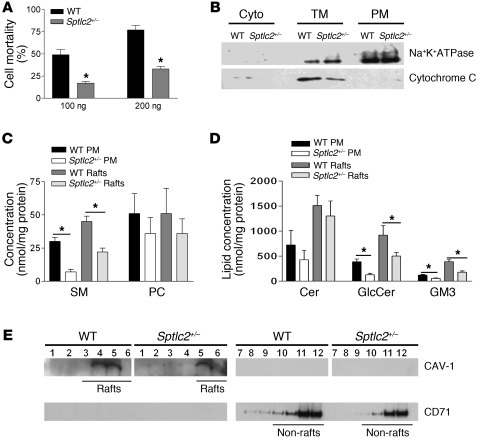