Polyploidy and multinucleation in the liver and kidney of p27CK– mice. 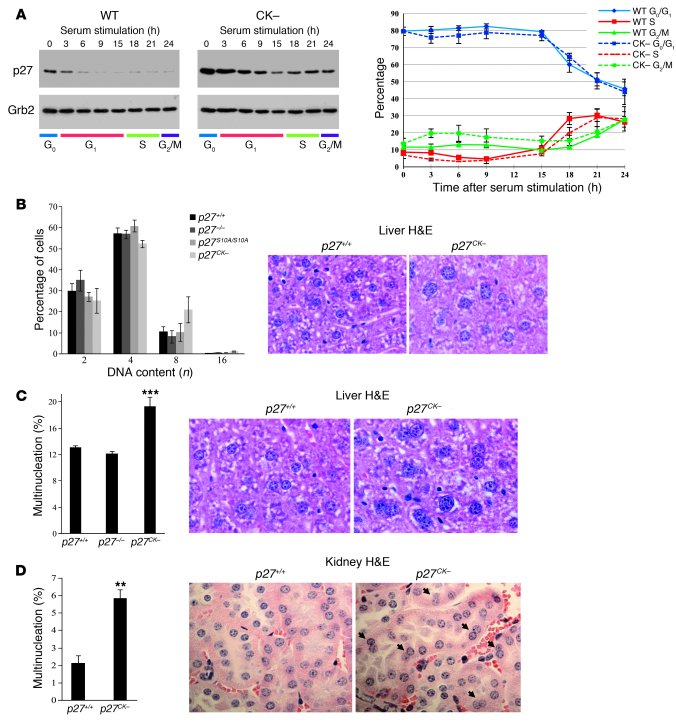 () p27 and p27CK– expression during the cell cycle. Primary MEFs (passage 2) derived from and mice were serum starved for 72 hours in DMEM/0.1% serum and replated in 10% serum medium for the indicated time. Proteins (40 μg) were resolved on SDS-PAGE, and membranes were probed with anti-p27 (C19) antibody; Grb2 levels were used as loading control. The graph shows the corresponding flow cytometry analysis of propidium iodide–stained serum-stimulated MEFs (average of 3 independent experiments ± SEM). () Analysis of hepatocyte DNA content of Feulgen-stained liver sections in ( = 11), ( = 5), ( = 8), and ( = 4) mice. Error bars represent SD. Examples of and H&E-stained liver sections illustrating nuclear size (original magnification, ×1,000). () Multinucleated cells were counted on 3-μm-thick sections stained with β-catenin or H&E in a total of 1,000 hepatocytes from at least 3 different mice per genotype. The results were analyzed using 1-way ANOVA with the Tukey-Kramer multiple comparison test; *** < 0.001. Examples of and H&E-stained liver sections illustrating multinucleation are shown (original magnification, ×1,000). () The percentage of multinucleated cells in kidney sections of ( = 4) and ( = 5) mice was determined. For each animal, 250–500 cells were counted. ** < 0.01, Mann-Whitney test. Examples of and H&E-stained kidney sections illustrating multinucleation are shown (arrows) (original magnification, ×600). Error bars in and represent SEM.