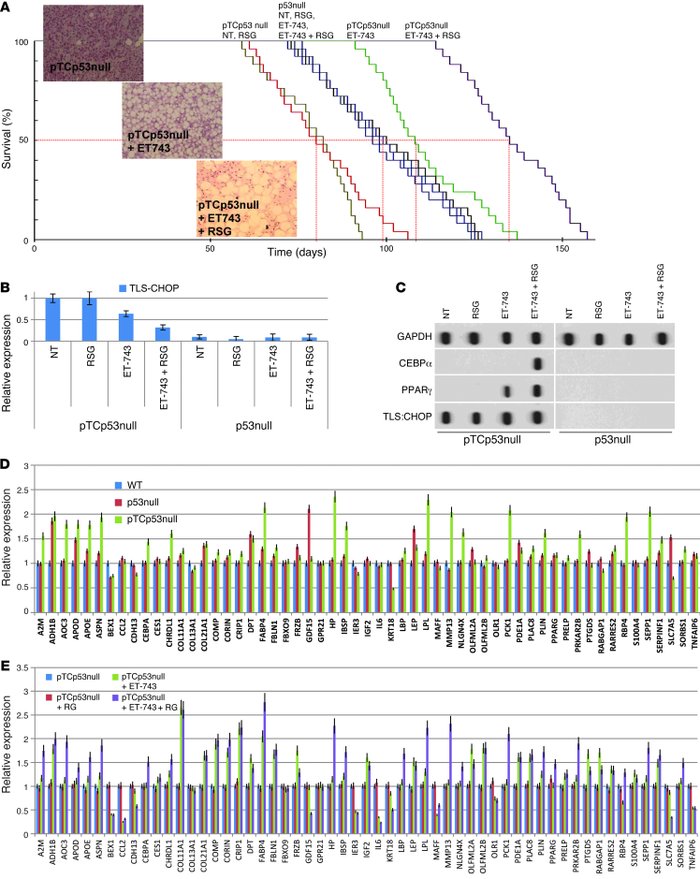 () Survival curve of p53null and pTCp53null mice receiving no treatment (NT), ET-743 (0.05 mg/kg via tail vein every 4 days), RSG (25 mg/kg via lavage daily), or both ET-743 and RSG concurrently ( = 20 per group). Treatment was initiated shortly after pathologic confirmation (tumor approximately 0.25–0.5 cm in greatest dimension) and continued until tumor was approximately 1 cm in greatest dimension or until mice showed signs of distress. On average, treatment lasted for 4–8 weeks, depending on the extent of response. All 4 survival curves for p53null mice were completely superimposable. Original magnification, ×100. () Quantitative RT-PCR analysis (average of 3 replicate experiments) of TLS:CHOP in p53null and pTCp53null mice, assessed at sacrifice. Values are shown relative to untreated pTCp53null group. () Transcriptional run-on assay from short-term single-cell suspensions (in vitro 24-hour cultures) of sarcomas from p53null and pTCp53null mice (see Methods) after in vivo treatment as in , reflecting transcriptional activity of TLS:CHOP (from the promoter) as well as PPARγ, CEBPα, and GADPH (from their respective endogenous promoters). ( and ) RT-PCR (average of 3 replicate experiments) of the indicated adipocytic differentiation gene set in bone marrow–derived MSCs of 8-week-old WT, p53null, and pTCp53null mice () or in pTCp53null mice treated as in for 4 weeks (). Values are shown relative to respective WT or untreated control.