Loss of memory B cells occurs from the onset of HIV-1 infection and persists into the chronic stages of infection. Lack of survival of these cells, even in subjects being treated, could primarily be the consequence of an altered local microenvironment induced by HIV infection. In this study we showed that memory B cell survival was significantly decreased in aviremic successfully treated (ST) subjects compared with subjects who control viral load as a result of natural immunity (elite controller [EC]) or with uninfected control (HIV–) subjects. The lower survival levels observed in memory B cells from ST subjects were the result of disrupted IL-2 signaling that led to increased transcriptional activity of Foxo3a and increased expression of its proapoptotic target TRAIL. Notably, memory B cell survival in ST subjects was significantly enhanced by the addition of exogenous IL-2 in a Foxo3a-dependent manner. We further showed that Foxo3a silencing by siRNA resulted in decreased expression of TRAIL and apoptosis levels in memory B cells from ST subjects. Our results thus establish a direct role for Foxo3a/TRAIL signaling in the persistence of memory B cells and provide a mechanism for the reduced survival of memory B cells during HIV infection. This knowledge could be exploited for the development of therapeutic and preventative HIV vaccines.

Loss of peripheral CD27+ memory B cells in ST subjects is associated with higher levels of apoptosis. 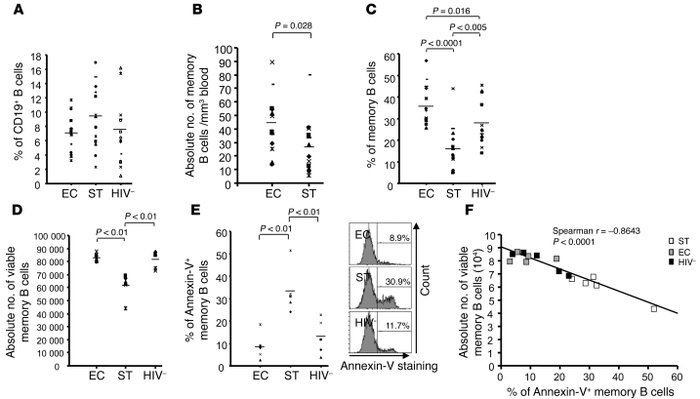 (–) Ex vivo PBMCs from ST, EC, and HIV– subjects were stained with anti-CD3–PB (PB, pacific blue), anti-CD19–Alexa Fluor 700, and anti-CD27–APC Cy7 Abs to measure () the percentages of CD19+ B cells within total lymphocytes, () the absolute number of CD27+ memory B cells per mm3 of blood in EC and ST subjects using available clinical data for HIV+ subjects ( = 13), and () the frequency of the memory population in total B cells ( = 15). () Memory B cells (105) from HIV+ and HIV– subjects were purified and cocultured for 7 days with 9 × 105 autologous CD19-depleted PBMCs in the presence of 10 μM AZT. The absolute number of viable memory B cells was determined on day 7 using trypan blue exclusion ( = 5). () The percentages of apoptotic memory B cells from ST, EC, and HIV– subjects on day 7 were analyzed using annexin V–APC staining. The histograms are representative of raw data from 5 independent experiments. () The correlation between the absolute numbers of viable memory B cells and the frequency of apoptosis of this population at day 7 of coculture was calculated ( = 15; Spearman test).