Restricted overexpression of mutant TDP-43 in motor neurons is achieved in transgenic rats. 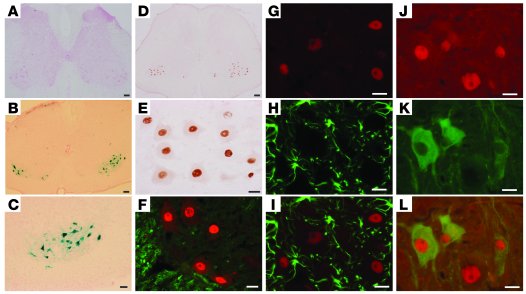 (–) X-gal staining revealed that the positive cells were restricted to the ventral horns of the lumbar cord in ChAT–tTA-9/TRE-LacZ double-transgenic ( and ), but not in TRE-LacZ single-transgenic (), rats. Cross sections of lumbar cords were first stained with X-gal and then were counterstained with fast red. ( and ) Immunohistochemistry revealed that human TDP-43 immunoreactivity was restricted in large cells in the ventral horns of the lumbar cord. ChAT–tTA-9/TRE–TDP-43M337V transgenic rat at 70 days old was examined for human TDP-43 expression at 10 days after Dox withdrawal. (–) Double-label immunofluorescence staining revealed that human TDP-43 (red, , , , , and ) was not colocalized with APC (a marker of oligodendrocytes; , green) or GFAP (a marker of astrocytes; and , green), but was colocalized with ChAT (a marker of motor neurons; and , green). Scale bars: 100 μm (, , and ); 50 μm (); 20 μm (–).