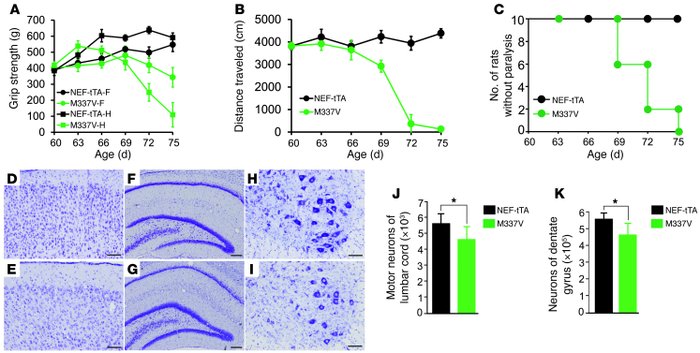 () The grip strength of forepaws (f) and hind paws (h) was measured for NEF-tTA/TRE–TDP-43M337V double-transgenic (M337V) and NEF-tTA single-transgenic rats. Data are means ± SD ( = 7). () Open-field assay revealed an unrecoverable reduction of mobility in M337V rats after TDP-43 transgene was turned on. Data are means ± SD ( = 7). () M337V rats rapidly developed paralysis after the transgene was turned on. Within 2 to 3 days, disease progressed from paralysis stage to end stages. (–) Cresyl violet staining revealed the structure of frontal cortex ( and ), hippocampus ( and ), and the ventral horn of the lumbar spinal cord ( and ). The tissues were taken from M337V rats at disease end stages (, , and ) or from NEF-tTA rats at matched ages (, , and ). ( and ) Stereological cell counting revealed the number of motor neurons (>25 μm in diameter) in lumbar cords (L3–L5) and revealed the number of neurons in dentate gyrus. Data are means ± SD ( = 5). * < 0.05. All rats used were females and were constantly given Dox in drinking water (50 μg/ml) until they were 60 days old. Scale bars: 100 μm (–, , and ); 200 μm ( and ).