To address the hypothesis that elevated blood alcohol increases systemic oxidant stress, we measured urinary excretion of isoprostanes (iPs), free radical–catalyzed products of arachidonic acid. Ten healthy volunteers received acute doses of alcohol (Everclear-R) or placebo under randomized, controlled, double-blind conditions. Urinary iPF2a-III increased in a time- and dosage-dependent manner after dosing with alcohol, with the peak urinary iPF2a-III excretion correlating with the rise in blood alcohol. To determine whether oxidant stress was associated with alcohol-induced liver disease (ALD), we then studied the excretion of iP in individuals with a documented history of alcohol-induced hepatitis or alcohol-induced chronic liver disease (AC). Both urinary iPF2a-III and urinary iPF2a-VI were markedly increased in patients with acute alcoholic hepatitis. In general, urinary iPF2a-III was significantly elevated in cirrhotic patients, relative to controls, but excretion was more pronounced when cirrhosis was induced by alcohol than by hepatitis C. Excretion of iPF2a-VI, as well as 4-hydroxynonenal and the iPF2a-III metabolite, 2,3-dinor-5,6-dihydro-iPF2a-III, was also increased in AC. Vitamin C, but not aspirin, reduced urinary iPs in AC. Thus, vasoactive iPs, which serve as indices of oxidant stress, are elevated in the urine in both acute and chronic ALD. Increased generation of iPs by alcohol in healthy volunteers is consistent with the hypothesis that oxidant stress precedes and contributes to the evolution of ALD. 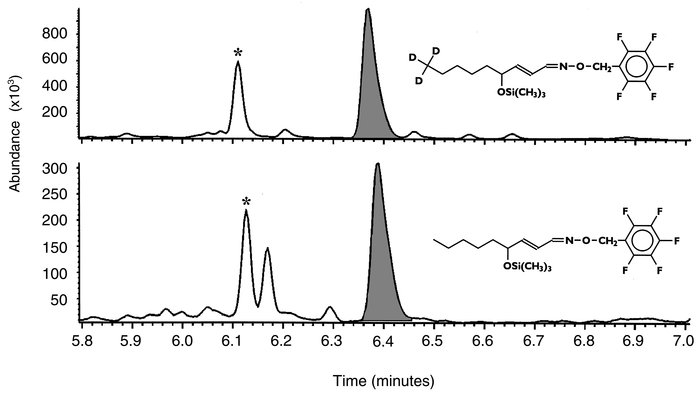 Quantitation of 4-HNE in human urine. Five milliliters of urine was spiked with 5 ng of trideuterated 4-HNE. The upper trace ( 286) represents the internal standard; the lower trace ( 283) represents endogenous 4-HNE. Each ion trace shows 2 peaks (filled peak and asterisk-marked peak), which originate from the and isomers generated when the pentafluorobenzyloxime derivative is formed.