Excitation–contraction coupling in cardiac muscle of familial hypertrophic cardiomyopathy (FHC) remains poorly understood, despite the fact that the genetic alterations are well defined. We characterized calcium cycling and contractile activation in trabeculae from a mutant mouse model of FHC (Arg403Gln knockin, α-myosin heavy chain). Wild-type mice of the same strain and age (∼20 weeks old) served as controls. During twitch contractions, peak intracellular Ca2+ ([Ca2+]i) was higher in mutant muscles than in the wild-type (P < 0.05), but force development was equivalent in the two groups. Ca2+ transient amplitude increased dramatically in both groups as stimulation rate increased from 0.2 to 4 Hz. Nevertheless, developed force fell at the higher stimulation rates in the mutants but not in controls (P < 0.05). The steady-state force–[Ca2+]i relationship was less steep in mutants (Hill coefficient, 2.94 ± 0.27 vs. 5.28 ± 0.64; P > 0.003), with no changes in the [Ca2+]i required for 50% activation or maximal Ca2+-activated force. Thus, calcium cycling and myofilament properties are both altered in FHC mutant mice: more Ca2+ is mobilized to generate force, but this does not suffice to maintain contractility at high stimulation rates. 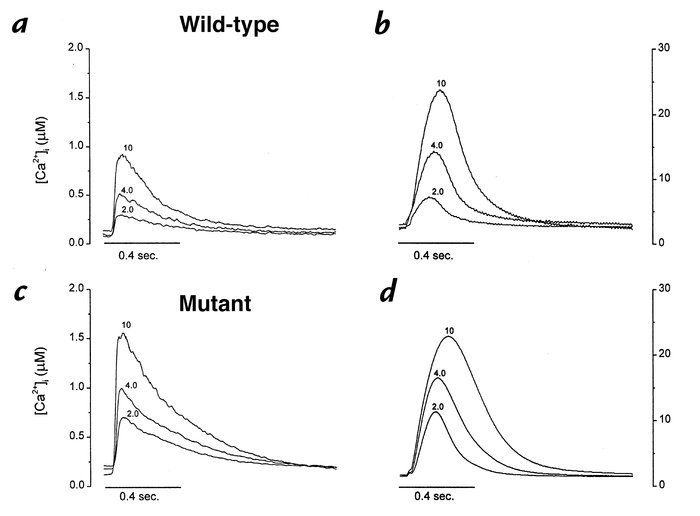