We have investigated the expression of heme oxygenase (HO) in the rat kidney and the effects of HO-dependent heme metabolites on the apical 70-pS K+ channel in the thick ascending limb (TAL). Reverse transcriptase–PCR (RT-PCR) and Western blot analyses indicate expression of the constitutive HO form, HO-2, in the rat cortex and outer medulla. Patch-clamping showed that application of 10 μM chromium mesoporphyrin (CrMP), an inhibitor of HO, reversibly reduced the activity of the apical 70-pS K+ channel, defined by NPo, to 26% of the control value. In contrast, addition of 10 μM magnesium protoporphyrin had no significant effect on channel activity. HO involvement in regulation of the apical 70-pS K+ channel of the TAL, was further indicated by the addition of 10 μM heme-L-lysinate, which significantly stimulated the channel activity in cell-attached patches by 98%. The stimulatory effect of heme on channel activity was also observed in inside-out patches in the presence of 0.5–1 mM reduced nicotinamide adenine dinucleotide phosphate. This was completely abolished by 10 μM CrMP, suggesting that a HO-dependent metabolite of heme mediated the effect. This was further supported by exposure of the cytosolic membrane of inside-out patches to a carbon monoxide–bubbled bath solution, which increased channel activity. Moreover, carbon monoxide completely abolished the effect of 10 μM CrMP on the channel activity. In contrast, 10 μM biliverdin, another HO-dependent metabolite of heme, had no effect. We conclude that carbon monoxide produced from heme via an HO-dependent metabolic pathway stimulates the apical 70-pS K+ channel in the rat TAL. 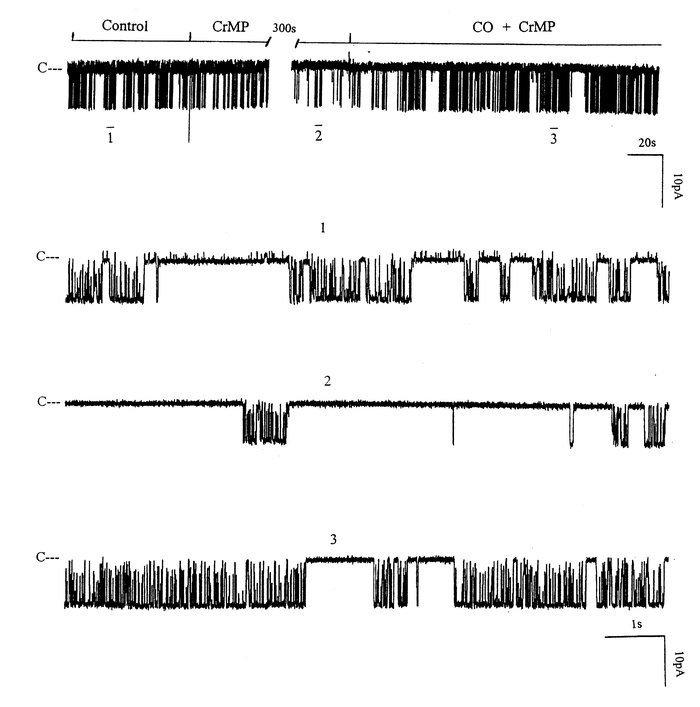 A channel recording showing the effect of CO (100 μM) and 10 μM CrMP on the activity of the 70-pS K+ channel in a cell-attached patch. The channel-closed level is indicated by , and the pipette holding potential was –50 mV. The top trace shows the time course of the experiment. Three parts of the trace, indicated by numbers , are extended at fast time resolution. The activity of the small-conductance K+ channel is also visible in trace .