C57BL/6J and 129S6/Sv (B6 and 129) mice differ dramatically in their susceptibility to developing diabetes in response to diet- or genetically induced insulin resistance. A major locus contributing to this difference has been mapped to a region on mouse chromosome 14 that contains the gene encoding PKCδ. Here, we found that PKCδ expression in liver was 2-fold higher in B6 versus 129 mice from birth and was further increased in B6 but not 129 mice in response to a high-fat diet. PRKCD gene expression was also elevated in obese humans and was positively correlated with fasting glucose and circulating triglycerides. Mice with global or liver-specific inactivation of the Prkcd gene displayed increased hepatic insulin signaling and reduced expression of gluconeogenic and lipogenic enzymes. This resulted in increased insulin-induced suppression of hepatic gluconeogenesis, improved glucose tolerance, and reduced hepatosteatosis with aging. Conversely, mice with liver-specific overexpression of PKCδ developed hepatic insulin resistance characterized by decreased insulin signaling, enhanced lipogenic gene expression, and hepatosteatosis. Therefore, changes in the expression and regulation of PKCδ between strains of mice and in obese humans play an important role in the genetic risk of hepatic insulin resistance, glucose intolerance, and hepatosteatosis; and thus PKCδ may be a potential target in the treatment of metabolic syndrome. 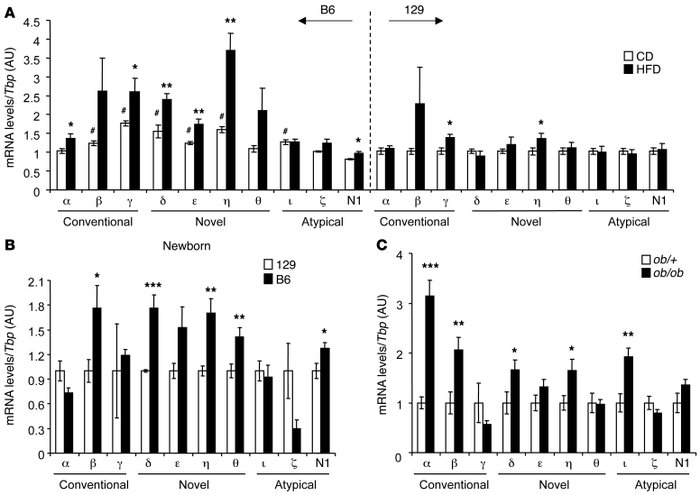