3BP2-deficient mice are osteoporotic with impaired osteoblast and osteoclast functions

3BP2-deficient mice are osteoporotic with impaired osteoblast and osteoclast functions

A fine balance between bone resorption by osteoclasts and bone formation by osteoblasts maintains bone homeostasis. In patients with cherubism, gain-of-function mutations in 3BP2, which is encoded by SH3-domain binding protein 2 (SH3BP2), cause cystic lesions with activated osteoclasts that lead to craniofacial abnormalities. However, little is known about the function of wild-type 3BP2 in regulating bone homeostasis. Here we have shown that 3BP2 is required for the normal function of both osteoblasts and osteoclasts. Initial analysis showed that Sh3bp2–/–mice developed osteoporosis as a result of reduced bone formation despite the fact that bone resorption was impaired. We demonstrated using reciprocal bone marrow chimeras, a cell-intrinsic defect of the osteoblast and osteoclast compartments in vivo. Further, Sh3bp2–/– osteoblasts failed to mature and form mineralized nodules in vitro, while Sh3bp2–/– osteoclasts spread poorly and were unable to effectively degrade dentine matrix in vitro. Finally, we showed that 3BP2 was required for Abl activation in osteoblasts and Src activation in osteoclasts, and demonstrated that the in vitro defect of each cell type was restored by the respective expression of activated forms of these kinases. These findings reveal an unanticipated role for the 3BP2 adapter protein in osteoblast function and in coordinating bone homeostatic signals in both osteoclast and osteoblast lineages.

3BP2 is required for osteoclast function but not differentiation. 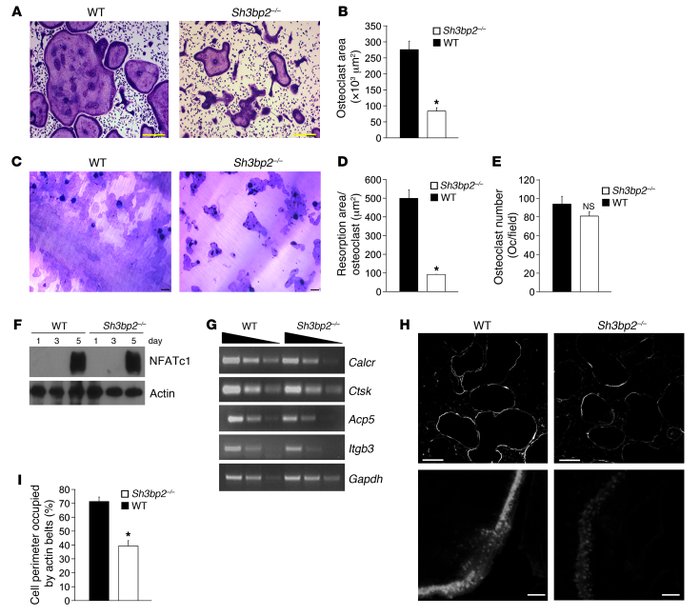