Several neurodegenerative disorders, including Parkinson disease (PD), are characterized by the presence of Lewy bodies — cytoplasmic inclusions containing α-synuclein protein aggregates — in the affected neurons. A poorly understood feature of Lewy body diseases is loss of sympathetic nerves in the heart and other organs, manifesting as orthostatic hypotension (OH; also known as postural hypotension). We asked whether sympathetic denervation is associated with decreased uptake of catecholamines, such as dopamine and norepinephrine, into storage vesicles within sympathetic neurons. We used 6-[18F]-dopamine (18F-DA) to track myocardial uptake and retention of catecholamines. Concurrently, the fate of intra-neuronal 18F-DA was followed by assessment of arterial plasma levels of the 18F-DA metabolite 18F-dihydroxyphenylacetic acid (18F-DOPAC). The ratio of myocardial 18F-DA to arterial 18F-DOPAC provided an index of vesicular uptake. Tracer concentrations were measured in patients with PD with or without orthostatic hypotension (PD+OH, PD-No-OH); in patients with pure autonomic failure (PAF, a Lewy body disease without parkinsonism); in patients with multiple system atrophy (MSA, a non–Lewy body synucleinopathy); and in normal controls. Patients with PD+OH or PAF had decreased vesicular 18F-DA uptake and accelerated 18F-DA loss, compared with MSA and control subjects. PD-No-OH patients could be subtyped into one of these categories based on their initial 18F-DA uptake. We conclude that sympathetic denervation in Lewy body diseases is associated with decreased vesicular uptake of neuronal catecholamines, suggesting that vesicular monoamine transport is impaired. Vesicular uptake may constitute a novel target for diagnosis, treatment, and prevention.

Concept diagram for the effects of denervation and decreased vesicular sequestration on the uptake and fate of 18F-DA. 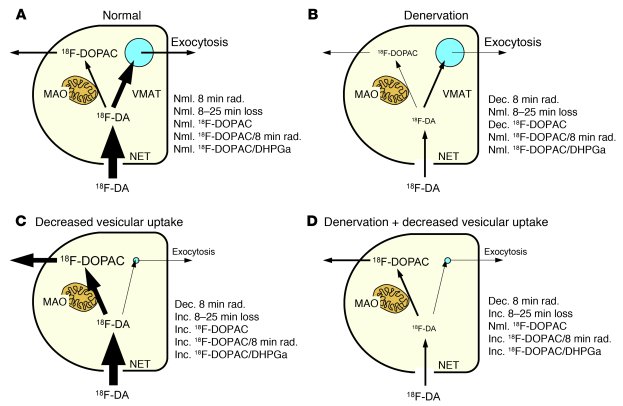