The mouse autosomal dominant mutation Mody develops hyperglycemia with notable pancreatic β-cell dysfunction. This study demonstrates that one of the alleles of the gene for insulin 2 in Mody mice encodes a protein product that substitutes tyrosine for cysteine at the seventh amino acid of the A chain in its mature form. This mutation disrupts a disulfide bond between the A and B chains and can induce a drastic conformational change of this molecule. Although there was no gross defect in the transcription from the wild-type insulin 2 allele or two alleles of insulin 1, levels of proinsulin and insulin were profoundly diminished in the β cells of Mody mice, suggesting that the number of wild-type (pro)insulin molecules was also decreased. Electron microscopy revealed a dramatic reduction of secretory granules and a remarkably enlarged lumen of the endoplasmic reticulum. Little proinsulin was processed to insulin, but high molecular weight forms of proinsulin existed with concomitant overexpression of BiP, a molecular chaperone in the endoplasmic reticulum. Furthermore, mutant proinsulin expressed in Chinese hamster ovary cells was inefficiently secreted, and its intracellular fraction formed complexes with BiP and was eventually degraded. These findings indicate that mutant proinsulin was trapped and accumulated in the endoplasmic reticulum, which could induce β-cell dysfunction and account for the dominant phenotype of this mutation. 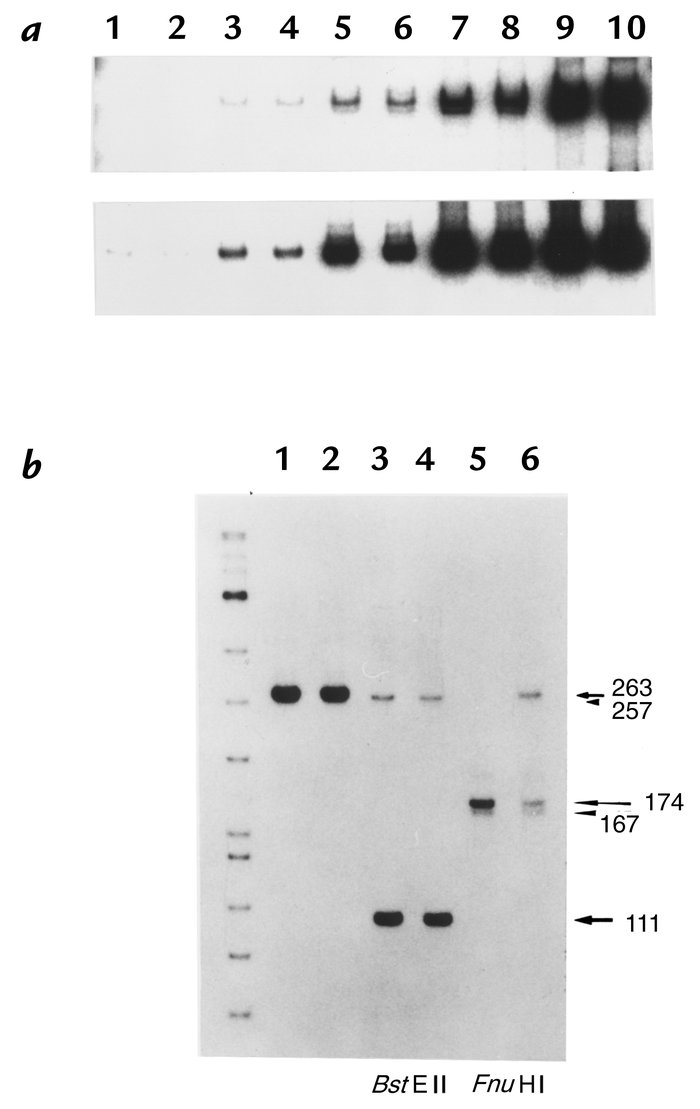 Insulin transcription in the islets. () Total RNA from islets was reverse transcribed to cDNA using oligo-(dT)17 primer. β-actin and insulin cDNAs were then amplified by PCR. The cycle numbers used for the PCR were 18 (lanes and ), 21 (lanes and ), 24 (lanes and ), 27 (lanes and ), and 30 (lanes and ), respectively. The amounts of cDNA from control C57BL/6J () and mice () were adjusted by the levels of amplified β-actin (). Note that both and transcripts should be amplified with equal efficiencies because primers were derived from the common sequences between them. The PCR products of (263 bp) and (257 bp) were not resolved in this gel system. The total insulin levels in the islets of mice were approximately 85%–90% of those of the control mice (). () The insulin transcripts amplified from islet RNA of either C57BL/6J (lanes , , and ) or mice (lanes , , and 6) were run without digestion (lanes and ). They were then digested with EII for discrimination between (257 bp) and (111 bp) transcripts (lanes and ). Similarly, they were digested with 4HI to separate (167 bp), wild-type (174 bp), and mutant (263 bp) transcripts (lanes and ). The left lane shows radiolabeled X174/f I digested DNA markers. Because the PCR products were labeled with an end-labeled 5′ primer, the radioactivity of each band corresponds to the expression level, irrespective of its size. The measurement of the radioactivity of each band revealed that 27% and 73% of the total insulin transcripts in C57BL/6J mice are derived from and , respectively. Similar values, 24% for and 76% for , were obtained from mice. Furthermore, 39% of the total insulin transcripts, which is approximately half the value of total , were derived from the mutant allele in mice, suggesting that both normal and mutant alleles are transcribed similarly.