The p53 tumor suppressor, a central mediator of chemosensitivity in normal cells, is functionally inactivated in many human cancers. Therefore, a central challenge in human cancer therapy is the identification of pathways that control tumor cell survival and chemosensitivity in the absence of functional p53. The p53-related transcription factors p63 and p73 exhibit distinct functions — p73 mediates chemosensitivity while p63 promotes proliferation and cell survival — and are both overexpressed in squamous cell carcinomas (SCCs). However, how p63 and p73 interact functionally and govern the balance between prosurvival and proapoptotic programs in SCC remains elusive. Here, we identify a microRNA-dependent mechanism of p63/p73 crosstalk that regulates p53-independent survival of both human and murine SCC. We first discovered that a subset of p63-regulated microRNAs target p73 for inhibition. One of these, miR-193a-5p, expression of which was repressed by p63, was activated by proapoptotic p73 isoforms in both normal cells and tumor cells in vivo. Chemotherapy caused p63/p73-dependent induction of this microRNA, thereby limiting chemosensitivity due to microRNA-mediated feedback inhibition of p73. Importantly, inhibiting miR-193a interrupted this feedback and thereby suppressed tumor cell viability and induced dramatic chemosensitivity both in vitro and in vivo. Thus, we have identified a direct, microRNA-dependent regulatory circuit mediating inducible chemoresistance, whose inhibition may provide a new therapeutic opportunity in p53-deficient tumors. 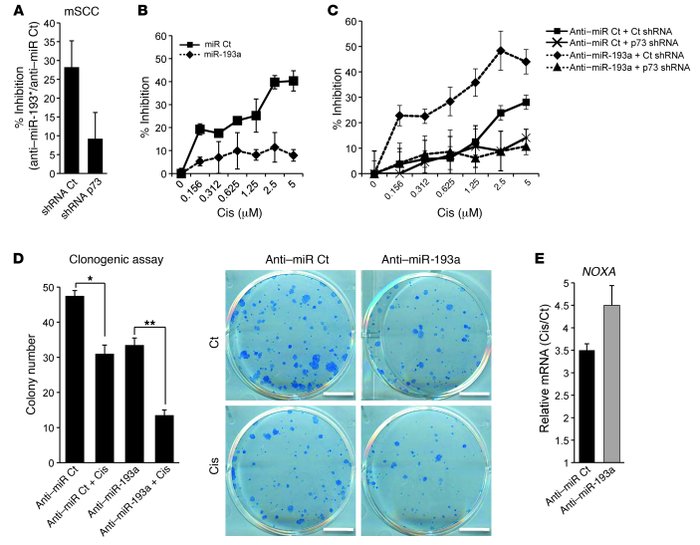