Asthma is considered a Th2 cell–associated disorder. Despite this, both the Th1 cell–associated cytokine IFN-γ and airway neutrophilia have been implicated in severe asthma. To investigate the relative contributions of different immune system components to the pathogenesis of asthma, we previously developed a model that exhibits several features of severe asthma in humans, including airway neutrophilia and increased lung IFN-γ. In the present studies, we tested the hypothesis that IFN-γ regulates mast cell function in our model of chronic asthma. Engraftment of mast cell–deficient KitW-sh/W-sh mice, which develop markedly attenuated features of disease, with wild-type mast cells restored disease pathology in this model of chronic asthma. However, disease pathology was not fully restored by engraftment with either IFN-γ receptor 1–null (Ifngr1–/–) or Fcε receptor 1γ–null (Fcer1g–/–) mast cells. Additional analysis, including gene array studies, showed that mast cell expression of IFN-γR contributed to the development of many FcεRIγ-dependent and some FcεRIγ-independent features of disease in our model, including airway hyperresponsiveness, neutrophilic and eosinophilic inflammation, airway remodeling, and lung expression of several cytokines, chemokines, and markers of an alternatively activated macrophage response. These findings identify a previously unsuspected IFN-γ/mast cell axis in the pathology of chronic allergic inflammation of the airways in mice.

Influence of IFN-γ or IFN-γR1 on the development of airway responses and leukocytes in BAL fluid. 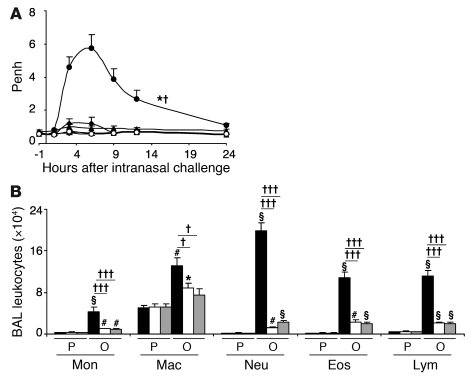