Impaired cardiac function is associated with myocardial triglyceride accumulation, but it is not clear how the lipids accumulate or whether this accumulation is detrimental. Here we show that hypoxia/ischemia-induced accumulation of lipids in HL-1 cardiomyocytes and mouse hearts is dependent on expression of the VLDL receptor (VLDLR). Hypoxia-induced VLDLR expression in HL-1 cells was dependent on HIF-1α through its interaction with a hypoxia-responsive element in the Vldlr promoter, and VLDLR promoted the endocytosis of lipoproteins. Furthermore, VLDLR expression was higher in ischemic compared with nonischemic left ventricles from human hearts and was correlated with the total lipid droplet area in the cardiomyocytes. Importantly, Vldlr–/– mice showed improved survival and decreased infarct area following an induced myocardial infarction. ER stress, which leads to apoptosis, is known to be involved in ischemic heart disease. We found that ischemia-induced ER stress and apoptosis in mouse hearts were reduced in Vldlr–/– mice and in mice treated with antibodies specific for VLDLR. These findings suggest that VLDLR-induced lipid accumulation in the ischemic heart worsens survival by increasing ER stress and apoptosis.

Hypoxia-mediated lipid accumulation in HL-1 cells requires exogenous lipoproteins and is mediated by endocytosis of triglyceride-rich lipoproteins (TRLs) through the VLDLR. 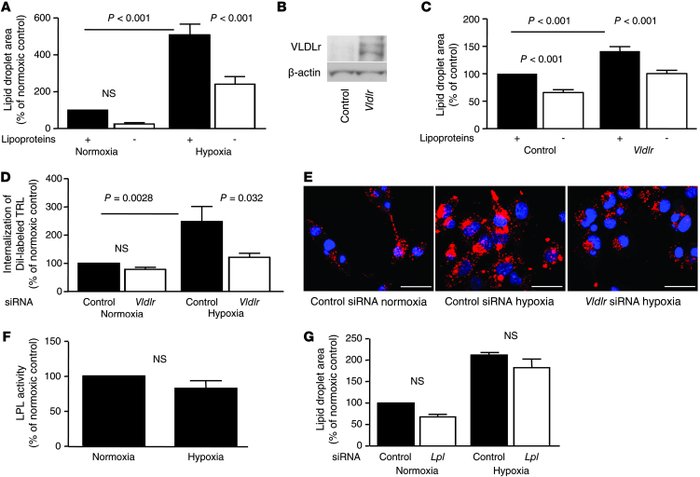