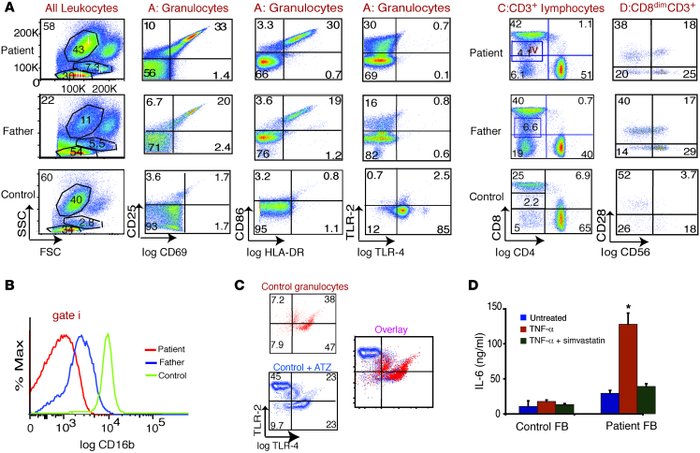 ( and ) Leukocyte populations were analyzed by multicolor flow cytometry; subsets identified by forward/scatter profiles, with mature granulocytes, monocytes, and lymphocytes falling in gates A, B, and C, respectively. The control data shown here represent blood samples donated from 20 normal individuals. () Cytometric profiles for CD25, CD69, CD86, HLA-DR, TLR-2, and TLR-4 (gate i, and fluorescence histograms of CD16b) and () for mature granulocytes/neutrophils. Also shown in are the CD4, CD8 profiles of CD3+ T cells; and CD28nullCD56+ in CD8dim T cells (gate iv). No significant differences were observed in the monocyte population (data not shown). () Overlay of treated and untreated cytometric profiles. Note that 50% of control granulocytes migrated to TLR-2+TLR-4– after the ATZ treatment. () IL-6 production by skin fibroblasts from healthy control and patient upon treatment of TNF-α, and TNF-α plus simvastatin, or in medium alone. * < 0.01. Data are presented as mean ± SD.