Uric acid is the metabolic end product of purine metabolism in humans. It has antioxidant properties that may be protective but can also be pro-oxidant, depending on its chemical microenvironment. Hyperuricemia predisposes to disease through the formation of urate crystals that cause gout, but hyperuricemia, independent of crystal formation, has also been linked with hypertension, atherosclerosis, insulin resistance, and diabetes. We discuss here the biology of urate metabolism and its role in disease. We also cover the genetics of urate transport, including URAT1, and recent studies identifying SLC2A9, which encodes the glucose transporter family isoform Glut9, as a major determinant of plasma uric acid levels and of gout development.

Urate transporters in kidney epithelial cells of humans and mice. 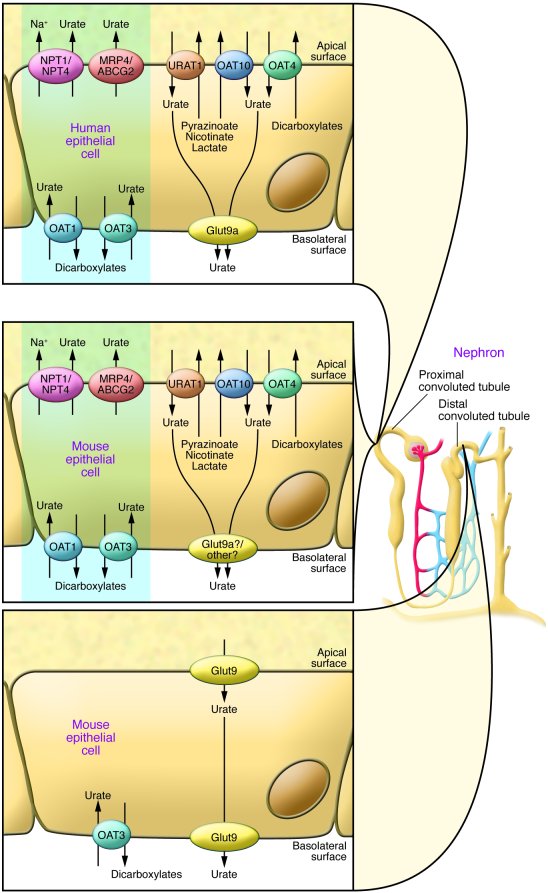 In humans (upper left panel), the urate reabsorption pathway involves the apical exchanger proteins URAT1, OAT4, and OAT10; intracellular urate is released through basolateral Glut9. Urate uptake by URAT1 and OAT10 is accelerated by intracellular monocarboxylates such as lactate, pyrazinoate, and nicotinate and by dicarboxylates for OAT4. Several apical monocarboxylate transporters are required to favor urate reabsorption, such as MCT9 and SMCT1 and -2 (see text). The excretion pathway (blue box) involves the basolateral urate/dicarboxylate exchangers OAT1 and OAT3 and the apical ATP-binding cassette proteins MRP4 and ABCG2, as well as the sodium/phosphate cotransporters NPT1 and NPT4. Functional organization of the apical transporters is regulated by interactions with PDZ domains present in URAT1, NPT1, OAT4, and the sodium/monocarboxylate cotransporter SMCT1 and with PDZK1 and NHERF1; and influenced by changes in actin polymerization regulated by the protein CARMIL, as determined by biochemical and genetic studies (see text). Urate transport in the mouse kidney involves both the proximal and distal convoluted tubules (middle and lower left panels). The same urate-transporting proteins present in humans are found in the mouse proximal tubules, except for Glut9, which is present at an extremely low levels. In mice, in contrast to humans, Glut9 is present at very high levels in both the apical and basolateral poles of distal convoluted tubule cells. However, it is not known which isoform of Glut9 is present in the apical and basolateral membranes.