Islet transplantation for the treatment of type 1 diabetes mellitus is limited in its clinical application mainly due to early loss of the transplanted islets, resulting in low transplantation efficiency. NKT cell–dependent IFN-γ production by Gr-1+CD11b+ cells is essential for this loss, but the upstream events in the process remain undetermined. Here, we have demonstrated that high-mobility group box 1 (HMGB1) plays a crucial role in the initial events of early loss of transplanted islets in a mouse model of diabetes. Pancreatic islets contained abundant HMGB1, which was released into the circulation soon after islet transplantation into the liver. Treatment with an HMGB1-specific antibody prevented the early islet graft loss and inhibited IFN-γ production by NKT cells and Gr-1+CD11b+ cells. Moreover, mice lacking either of the known HMGB1 receptors TLR2 or receptor for advanced glycation end products (RAGE), but not the known HMGB1 receptor TLR4, failed to exhibit early islet graft loss. Mechanistically, HMGB1 stimulated hepatic mononuclear cells (MNCs) in vivo and in vitro; in particular, it upregulated CD40 expression and enhanced IL-12 production by DCs, leading to NKT cell activation and subsequent NKT cell–dependent augmented IFN-γ production by Gr-1+CD11b+ cells. Thus, treatment with either IL-12– or CD40L-specific antibody prevented the early islet graft loss. These findings indicate that the HMGB1-mediated pathway eliciting early islet loss is a potential target for intervention to improve the efficiency of islet transplantation.

NKT cell–dependent IL-12 and IFN-γ production by liver MNCs in response to HMGB1. 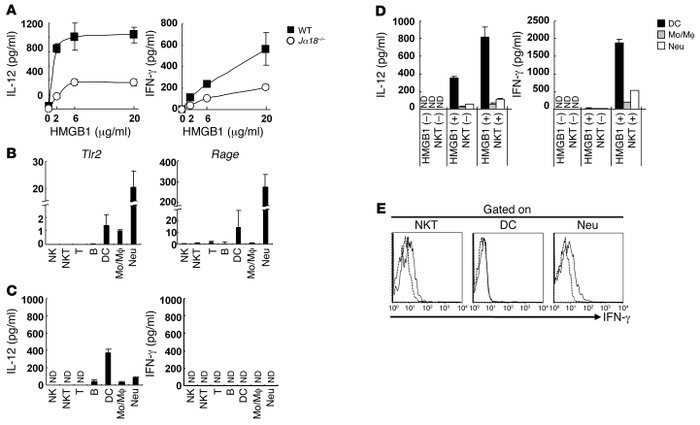 () Liver MNCs (2 × 106/well) isolated from wild-type or α mice were cultured with the indicated doses of HMGB1 in vitro for 48 hours and measured for IL-12 and IFN-γ. Representative data from 2 experiments are shown. () PCR analysis on HMGB1 receptors. FACS-sorted liver MNCs (2 × 103 for , , or ) were analyzed for mRNA levels by quantitative real-time PCR. Data were analyzed by the ΔΔCt method using the expression level in Mo/Mϕ as normalized control. () Cytokine production in FACS-sorted liver MNCs upon stimulation with HMGB1. FACS-sorted cells were cultured in vitro (1 × 105 cells/well) for 48 hours in the presence of HMGB1 (20 μg/ml). The amounts of IL-12 and IFN-γ were measured by CBA ( = 3). () Cytokine production by DCs, Mo/Mϕ, or Neu in the presence of NKT cells. FACS-sorted Gr-1–CD11b+CD11c+ DCs, Gr-1–CD11b+CD11c– Mo/Mϕ, and Gr-1+CD11b+CD11c– Neu (4 × 104) were cocultured in vitro with NKT cells (2 × 105) in the presence of HMGB1 (20 μg/ml) for 48 hours. The amounts of IL-12 and IFN-γ were measured by CBA ( = 3). () Intracellular cytokine staining of liver MNCs after HMGB1 treatment. Liver MNCs (2 × 106) were cultured with HMGB1 (20 μg/ml) for 24 hours, and the indicated cells were gated and analyzed for their production of IFN-γ by intracellular cytokine staining.