Cell therapy holds promise for tissue regeneration, including in individuals with advanced heart failure. However, treatment of heart disease with bone marrow cells and skeletal muscle progenitors has had only marginal positive benefits in clinical trials, perhaps because adult stem cells have limited plasticity. The identification, among human pluripotent stem cells, of early cardiovascular cell progenitors required for the development of the first cardiac lineage would shed light on human cardiogenesis and might pave the way for cell therapy for cardiac degenerative diseases. Here, we report the isolation of an early population of cardiovascular progenitors, characterized by expression of OCT4, stage-specific embryonic antigen 1 (SSEA-1), and mesoderm posterior 1 (MESP1), derived from human pluripotent stem cells treated with the cardiogenic morphogen BMP2. This progenitor population was multipotential and able to generate cardiomyocytes as well as smooth muscle and endothelial cells. When transplanted into the infarcted myocardium of immunosuppressed nonhuman primates, an SSEA-1+ progenitor population derived from Rhesus embryonic stem cells differentiated into ventricular myocytes and reconstituted 20% of the scar tissue. Notably, primates transplanted with an unpurified population of cardiac-committed cells, which included SSEA-1– cells, developed teratomas in the scar tissue, whereas those transplanted with purified SSEA-1+ cells did not. We therefore believe that the SSEA-1+ progenitors that we have described here have the potential to be used in cardiac regenerative medicine. 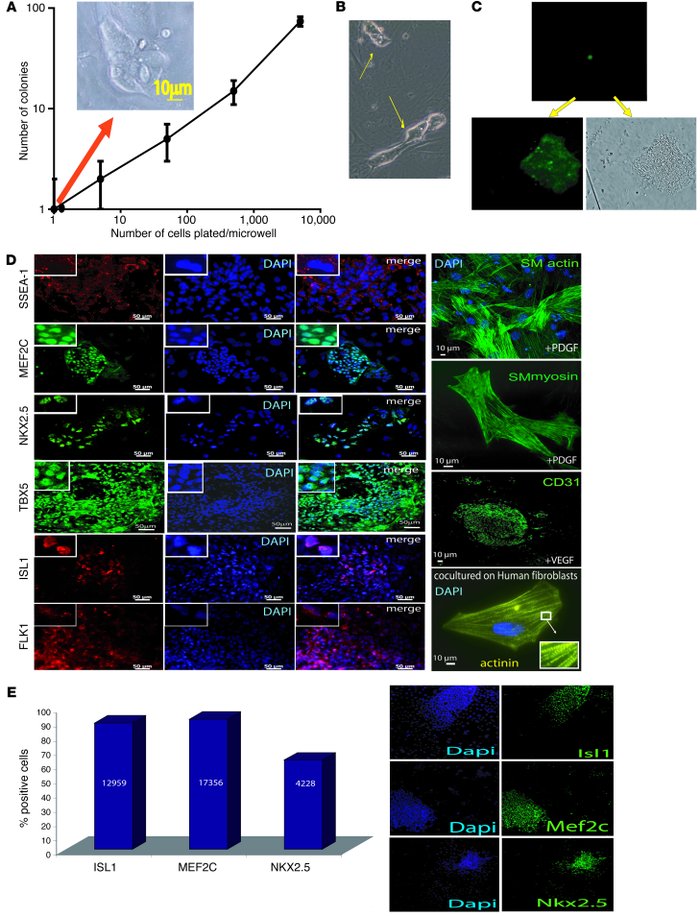 (–) Cell clonogenicity. BMP2-induced SSEA-1+–sorted cells were plated at different densities (5,000, 500, 50, 5, and 1 cell/well) in 96-well plates containing MEFs. Five days later, cells were stained with DAPI to be scanned using an Arrayscan. () The orange arrow indicates that the colony was generated in a single cell-containing well. Cell colonies were numbered using the Cellomics viewer software. ( and ) A colony generated from a single SSEA-1+ cell (arrows) and visualized 2 () or 5 () days later (above the graph). () A single SSEA-1+ cell derived from the HUES-9 pOct-4-GFP cell line that was plated in a microwell of 96-well plates and visualized by fluorescence right after plating (top image) or 5 days later (bottom GFP and transmitted light images). () Immunofluorescence of BMP2-induced SSEA-1+ cells cultured for 5 days on MEFs in the absence of growth factors or challenged by PDGF or VEGF, or cocultured with human cardiac fibroblasts. Top left corner insets show high-magnification images of localization of markers. The inset in the actinin panel shows a high-magnification image of sarcomeres. Experiments were done in triplicate with similar results. () BMP2-induced SSEA-1+ cells cultured for 5 days on MEFs immunostained with anti-ISL1, anti-MEF2C, or anti-NKX2.5 antibodies were quantified by HCCI using an Arrayscan. The numbers in the bars of the graph indicate the number of scored and validated cells. Original magnification ×20; ×40 (smooth muscle [SM] myosin in ); ×5 (insets in ).