Studies in mice and humans have revealed that the T cell, immunoglobulin, mucin (TIM) genes are associated with several atopic diseases. TIM-1 is a type I membrane protein that is expressed on T cells upon stimulation and has been shown to modulate their activation. In addition to a recently described interaction with dendritic cells, TIM-1 has also been identified as a phosphatidylserine recognition molecule, and several protein ligands have been proposed. Our understanding of its activity is complicated by the possibility that TIM-1 possesses multiple and diverse binding partners. In order to delineate the function of TIM-1, we generated monoclonal antibodies directed to a cleft formed within the IgV domain of TIM-1. We have shown here that antibodies that bind to this defined cleft antagonize TIM-1 binding to specific ligands and cells. Notably, these antibodies exhibited therapeutic activity in a humanized SCID model of experimental asthma, ameliorating inflammation, and airway hyperresponsiveness. Further experiments demonstrated that the effects of the TIM-1–specific antibodies were mediated via suppression of Th2 cell proliferation and cytokine production. These results demonstrate that modulation of the TIM-1 pathway can critically influence activated T cells in a humanized disease model, suggesting that TIM-1 antagonists may provide potent therapeutic benefit in asthma and other immune-mediated disorders.

Cellularity and the expression of human TIM-1. 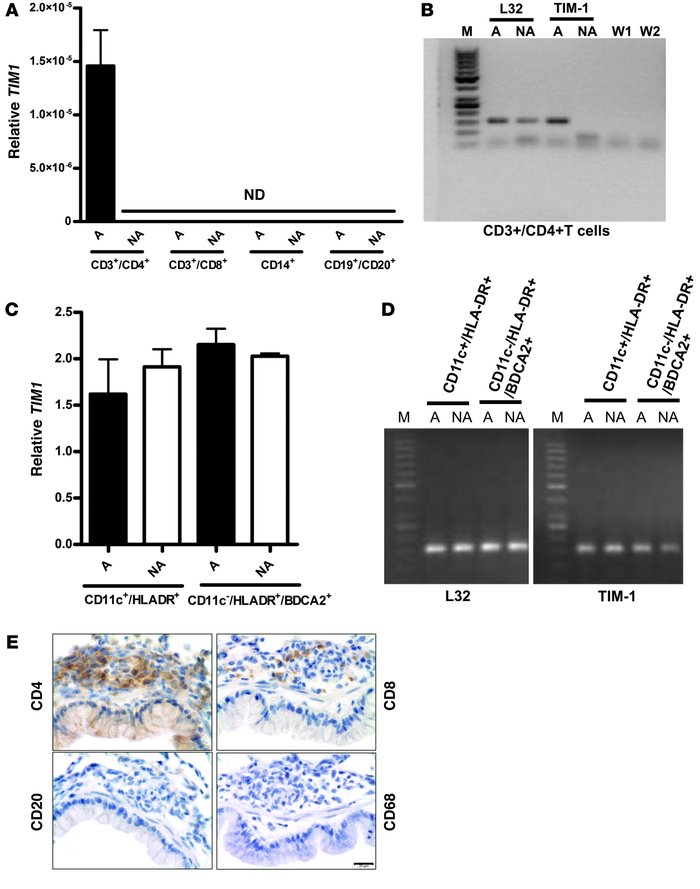