Development of a vaccine that targets blood-stage malaria parasites is imperative if we are to sustainably reduce the morbidity and mortality caused by this infection. Such a vaccine should elicit long-lasting immune responses against conserved determinants in the parasite population. Most blood-stage vaccines, however, induce protective antibodies against surface antigens, which tend to be polymorphic. Cell-mediated responses, on the other hand, offer the theoretical advantage of targeting internal antigens that are more likely to be conserved. Nonetheless, few of the current blood-stage vaccine candidates are able to harness vigorous T cell immunity. Here, we present what we believe to be a novel blood-stage whole-organism vaccine that, by combining low doses of killed parasite with CpG-oligodeoxynucleotide (CpG-ODN) adjuvant, was able to elicit strong and cross-reactive T cell responses in mice. Our data demonstrate that immunization of mice with 1,000 killed parasites in CpG-ODN engendered durable and cross-strain protection by inducing a vigorous response that was dependent on CD4+ T cells, IFN-γ, and nitric oxide. If applicable to humans, this approach should facilitate the generation of robust, cross-reactive T cell responses against malaria as well as antigen availability for vaccine manufacture. 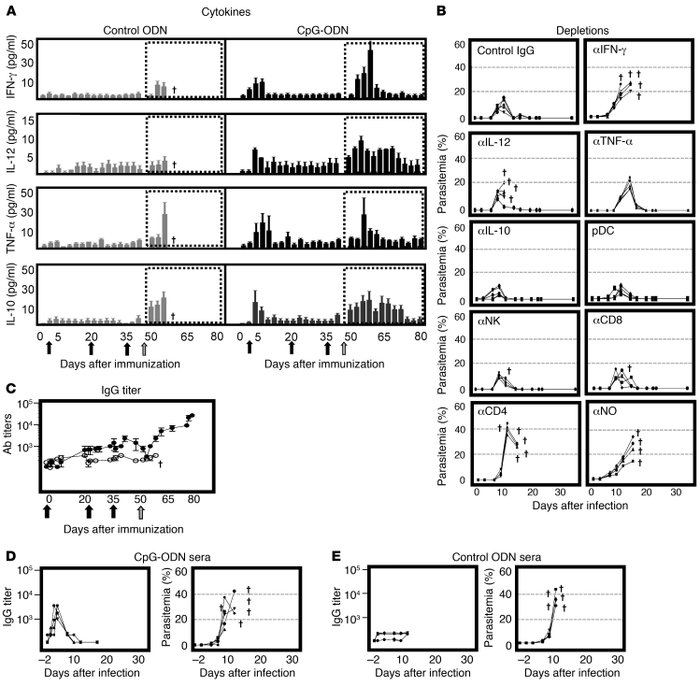 () To determine the profile of cytokine secretion, levels of IFN-γ (first panel), IL-12 (second panel), TNF-α (third panel), and IL-10 (fourth panel) were assessed in sera collected from A/J mice during immunization with 103 (AS) prbc in control ODN (gray bars) or CpG-ODN (black bars) as well as following challenge (dotted boxes). Immunizations (1 priming and 2 boost injections) are indicated as black arrows and challenge as a gray arrow on the axis (days after immunization). Results represent mean ± SEM. †Animals that succumbed to infection. () To identify cytokines and cell types essential for protection, A/J mice were immunized with 103 prbc in CpG-ODN and subsequently depleted of IFN-γ, IL-12, TNF-α, IL-10, pDC, NK, CD8, CD4, or NO as described in Methods. Mice were then challenged i.v. with 105 homologous (AS) prbc and the outcome of infection monitored. Data for individual mice are shown. () To determine the kinetics of antibody responses during immunization and challenge, A/J mice were immunized with 103 (AS) prbc in CpG-ODN (black circles) or control ODN (white circles) and titers of parasite-specific IgG against homologous antigen assessed. Reciprocal median total IgG titers and interquartile ranges are shown. (, ) To ascertain a role for antibodies in protection, naive A/J mice were adoptively transferred on days –1, 0, and 1 with 200 ml i.p. of serum collected from immune (103 [AS] prbc in CpG-ODN) or control (103 [AS] prbc in control ODN) donors. Recipients were challenged with homologous 105 (AS) prbc on day 0. Parasitemia and parasite-specific IgG titers against homologous (AS) were monitored. Reciprocal median total IgG titers and interquartile ranges are shown. All data sets are representative of 5 mice per group of 2 independent experiments performed.