We investigated the possible involvement of the autonomic nervous system in the effect of a long-term elevation of plasma free fatty acid (FFA) concentration on glucose-induced insulin secretion (GIIS) in rats. Rats were infused with an emulsion of triglycerides (Intralipid) for 48 hours (IL rats). This resulted in a twofold increase in plasma FFA concentration. At the end of infusion, GIIS as reflected in the insulinogenic index (ΔI/ΔG) was 2.5-fold greater in IL rats compared with control saline-infused rats. The ratio of sympathetic to parasympathetic nervous activities was sharply decreased in IL rats relative to controls. GIIS was studied in the presence of increasing amounts of α- and β-adrenoreceptor agonists and antagonists. The lowest concentrations of the α2A-adrenoreceptor agonist oxymetazoline, which were ineffective in control rats, reduced GIIS in IL rats. At the dose of 0.3 pmol/kg, GIIS became similar in IL and control rats. The use of β-adrenoreceptor agonist (isoproterenol) or antagonist (propranolol) did not result in a significant alteration in GIIS in both groups. GIIS remained as high in IL vagotomized rats as in intact IL rats, indicating that changes in parasympathetic tone were of minor importance. Altogether, the data show that lipid infusion provokes β-cell hyperresponsiveness in vivo, at least in part through changes in α2-adrenergic innervation. 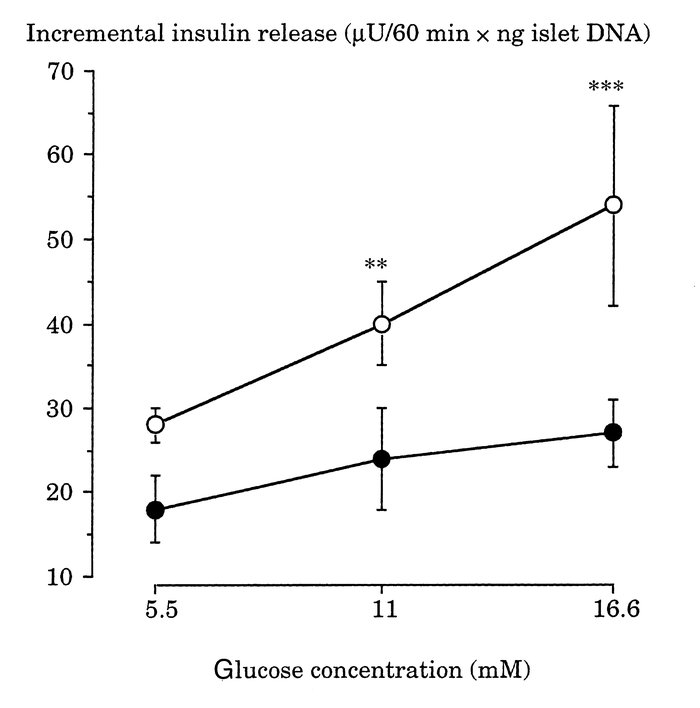 Effects of increasing concentrations of glucose on insulin release by freshly isolated islets of control () and lipids-infused () rats. Values are means ± SEM of five cases for both groups. ** < 0.01, *** < 0.001, significantly different from 5.5 mM glucose.