Muscle wasting is associated with a number of pathophysiologic conditions, including metabolic acidosis, diabetes, sepsis, and high angiotensin II levels. Under these conditions, activation of muscle protein degradation requires endogenous glucocorticoids. As the mechanism(s) underlying this dependence on glucocorticoids have not been identified, we analyzed the effects of glucocorticoids on muscle wasting in a mouse model of acute diabetes. Adrenalectomized, acutely diabetic mice given a physiologic dose of glucocorticoids exhibited decreased IRS-1–associated PI3K activity in muscle and progressive muscle atrophy. These responses were related to increased association of PI3K with the glucocorticoid receptor (GR). In mice with muscle-specific GR deletion (referred to as MGRKO mice), acute diabetes minimally suppressed IRS-1–associated PI3K activity in muscle and did not cause muscle atrophy. However, when a physiologic dose of glucocorticoids was given to mice with muscle-specific IR deletion, muscle protein degradation was accelerated. Fluorescence resonance energy transfer and an in vitro competition assay revealed that activated GRs competed for PI3K, reducing its association with IRS-1. Reexpression of WT GRs or those with a mutation in the nuclear localization signal in the muscle of MGRKO mice indicated that competition for PI3K was a prominent mechanism underlying reduced IRS-1–associated PI3K activity. This nongenomic influence of the GR contributes to activation of muscle protein degradation. We therefore conclude that stimulation of muscle proteolysis requires 2 events, increased glucocorticoid levels and impaired insulin signaling. 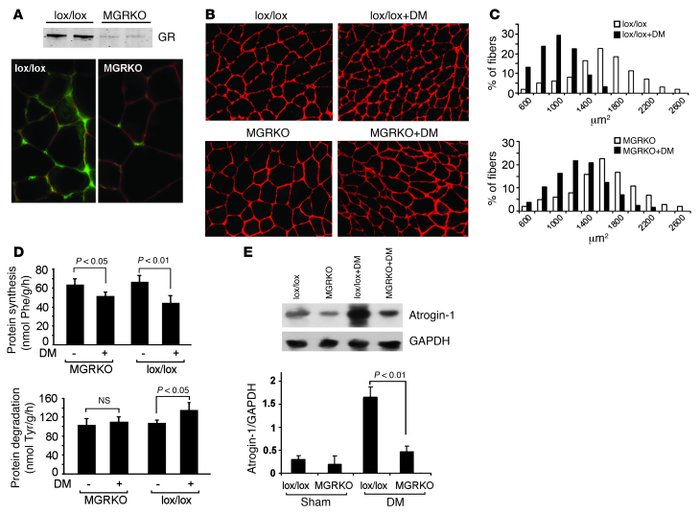 () Immunostaining of dystrophin (red) and GR (green) and Western blotting revealed minimal expression of the GR in myofibers of MGRKO mice. Original magnification, ×400. ( and ) The distribution of muscle fiber sizes in control () or MGRKO mice with and without acute diabetes (DM) ( = 3 in both groups and 300 myofibers examined) differed. The shift of muscle fiber sizes associated with diabetes in mice was partially corrected in MGRKO mice. Original magnification, ×200. () Rates of protein synthesis and degradation in muscles of MGRKO and mice demonstrated that the absence of the GR prevented the increase in protein degradation induced by diabetes ( = 6 in each group). Diabetes depressed protein synthesis in muscle of both MGRKO and mice. () The increased expression of Atrogin-1/MAFbx in muscle of diabetic mice was eliminated in muscle of diabetic MGRKO mice ( = 6 in both groups).