The formation of polyploid cells is part of the developmental program of several tissues. During postnatal development, binucleated tetraploid cells arise in the liver, caused by failure in cytokinesis. In this report, we have shown that the initiation of cytokinesis failure events and the subsequent appearance of binucleated tetraploid cells are strictly controlled by the suckling-to-weaning transition in rodents. We found that daily light/dark rhythms and carbohydrate intake did not affect liver tetraploidy. In contrast, impairment of insulin signaling drastically reduced the formation of binucleated tetraploid cells, whereas repeated insulin injections promoted the generation of these liver cells. Furthermore, inhibition of Akt activity decreased the number of cytokinesis failure events, possibly through the mammalian target of rapamycin signaling complex 2 (mTORC2), which indicates that the PI3K/Akt pathway lies downstream of the insulin signal to regulate the tetraploidization process. To our knowledge, these results are the first demonstration in a physiological context that insulin signaling through Akt controls a specific cell division program and leads to the physiologic generation of binucleated tetraploid liver cells.

Cytokinesis failure is induced by the suckling-to-weaning transition. 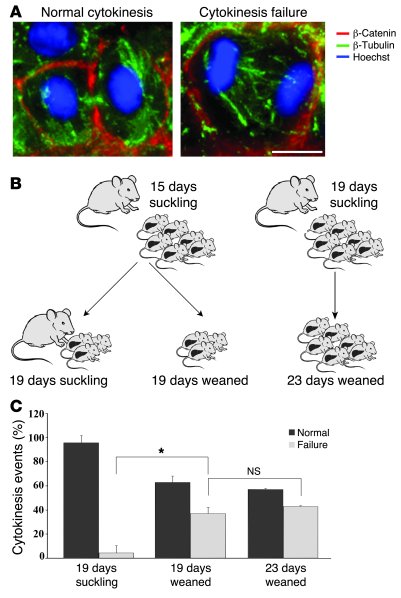 () Immunostaining of liver sections with β-catenin (plasma membrane labeling) and β-tubulin (microtubule labeling). Images of telophase were visualized as condensed chromatin staining (Hoechst 33342). Immunostaining allowed telophases that completed cytokinesis to be distinguished from those that did not. Scale bar: 10 μm. () Left: Rats from the same litter were either weaned at age 15 days and fed a high-carbohydrate diet or left with their mother with no access to solid food. All rats were sacrificed at 19 days of age. Right: Rats from a single litter were weaned at 19 days of age, fed a high-carbohydrate diet, and sacrificed at day 23. () Cytokinesis in 19-day suckling and in 19- and 23-day weaned rats as in . Percentages of normal cyto­kinesis and cytokinesis failure were calculated by analysis of β-catenin, β-tubulin, and Hoechst immunostaining on tissue sections. For each animal, 50 telophases were analyzed. Results are means ± SEM ( = 6 per group). * < 0.05.