Seborrheic keratoses (SKs) are common, benign epithelial tumors of the skin that do not, or very rarely, progress into malignancy, for reasons that are not understood. We investigated this by gene expression profiling of human SKs and cutaneous squamous cell carcinomas (SCCs) and found that several genes previously connected with keratinocyte tumor development were similarly modulated in SKs and SCCs, whereas the expression of others differed by only a few fold. In contrast, the tyrosine kinase receptor FGF receptor–3 (FGFR3) and the transcription factor forkhead box N1 (FOXN1) were highly expressed in SKs, and close to undetectable in SCCs. We also showed that increased FGFR3 activity was sufficient to induce FOXN1 expression, counteract the inhibitory effect of EGFR signaling on FOXN1 expression and differentiation, and induce differentiation in a FOXN1-dependent manner. Knockdown of FOXN1 expression in primary human keratinocytes cooperated with oncogenic RAS in the induction of SCC-like tumors, whereas increased FOXN1 expression triggered the SCC cells to shift to a benign SK-like tumor phenotype, which included increased FGFR3 expression. Thus, we have uncovered a positive regulatory loop between FGFR3 and FOXN1 that underlies a benign versus malignant skin tumor phenotype.

FOXN1 and FGFR3 mRNA levels are differentially modulated in SK versus SCC lesions. 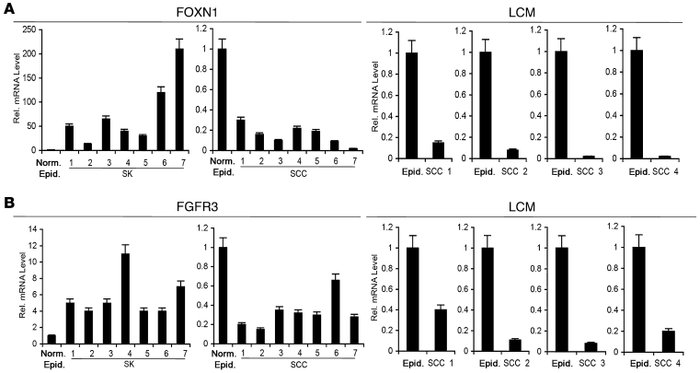 () RNAs extracted from 7 separate SK lesions, 7 separate surgically excised SCC lesions, and 3 normal, age-matched control epidermis specimens were subjected to real-time RT-PCR with oligonucleotide primers for gene expression levels of FOXN1. The β-actin mRNA level was used for internal normalization. Similar results were obtained after normalization to 36B4 in this and other experiments. Gene expression values in SK and SCC specimens are expressed as fold expression relative to the average of the 3 normal controls. We similarly analyzed 4 other SCC samples obtained by laser capture microdissection (LCM) along with surrounding control epidermis. () Samples as in were analyzed for FGFR3 mRNA expression by real-time RT-PCR, with corresponding specific primers and β-actin normalization. Error bars denote SEM.